"If June is a possibility, (the Federal Reserve) will want to prepare markets for that," said Mark Zandi, chief economist at Moody's Analytics. 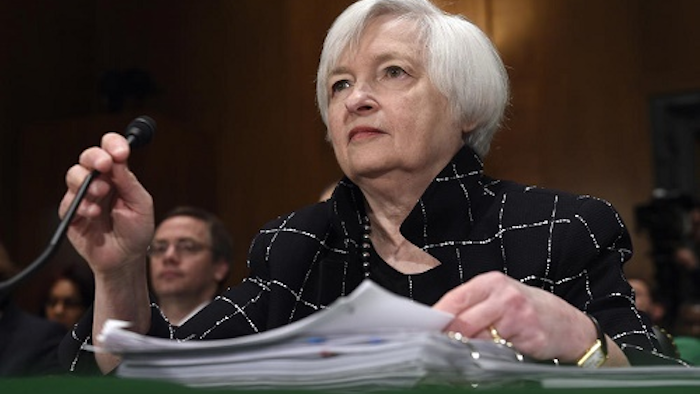 WASHINGTON (AP) — On this, pretty much every economist agrees: The Federal Reserve will keep interest rates unchanged when it ends its latest policy meeting Wednesday. What's unclear is whether it will hint about the likelihood of a rate hike at its next meeting in June.

With the U.S. job market healthy and the stock market up, some economists think the Fed will want to put investors on notice that a June rate increase is conceivable.

"If June is a possibility, they will want to prepare markets for that," said Mark Zandi, chief economist at Moody's Analytics.

But many other analysts say they expect the statement that the Fed will issue Wednesday to convey little about the timing of its next rate hike, given that the outlook for global growth remains so uncertain.

Concerns have been rising about the world economy, and any major international slump would, in turn, hinder U.S. growth. A sharp slowdown in China — the world's second-largest economy after the United States — has already hurt the developing world. Europe is straining to gain momentum, and Japan is hobbled by wary consumers and an aging population.

Even in the United States, despite a robust job market, key sectors like manufacturing and energy have been bruised by a strong dollar and shrunken oil prices. Consumers have barely stepped up their spending this year.

And on Thursday, the government is expected to estimate that the U.S. economy grew at a tepid annual rate under 1 percent in the January-March quarter. Some forecasters think growth might have been as weak as 0.3 percent, which would mean the economy nearly stalled out last quarter.

"I am not sure they will have the confidence to send a signal this week that June is a go for a hike," said Diane Swonk, chief economist at Diane Swonk Economics in Chicago.

On Thursday, for example, when the Bank of Japan meets, a key topic will be what else it might do to fight economic weakness, raise inflation and blunt a rise in the yen's value against the dollar, which hurts Japan's exporters. In January, in a desperate bid to raise inflation, Japan's central bank introduced negative rates. Yet inflation and growth remain stuck near zero.

Last week, Mario Draghi, head of the European Central Bank, made clear he was ready to launch more stimulus efforts if needed to energize the 19-nation eurozone economy. That pledge came after the ECB had already expanded its stimulus programs in March.

China's sliding economy has stabilized after worries about its growth had rocked financial markets in January. But now, a new challenge has raised international concerns: A June 23 referendum in which Britain will decide whether to leave the European Union. President Barack Obama and other world leaders have warned that a British exit from the EU could threaten the global economy.

Because that vote will occur just a week after the Fed's June 14-15 meeting, some analysts have suggested that the U.S. central bank would avoid any rate hike in June for fear it could rattle markets ahead of the British vote.

Since raising rates from record lows in December, the Fed has grown concerned about economic pressures from overseas and has signaled its willingness to wait for those pressures to ease. The minutes of their March meeting noted that several Fed officials felt that raising rates again in April "would signal a sense of urgency they did not think was appropriate."

The Fed's rate hike in December was its first in nearly a decade, and it ended a seven-year period in which the central bank had kept its benchmark rate near zero. At the December meeting, the Fed signaled that four additional rate hikes could occur in 2016 but at its March meeting, it cut that expectation from four to just two rate hikes.

Not all Fed officials favor a go-slow approach. Esther George, president of the Fed's Kansas City regional bank, dissented at the March meeting, saying she preferred another rate hike. She may dissent again this week, and she might not be alone.

Still, a solid majority of officials appear to support the cautious approach being pursued by Chair Janet Yellen. In her most recent speech on the economy, Yellen said she still envisioned only a gradual pace of rates increases in light of global threats. Those remarks helped fuel the rally on Wall Street.