It was U.S. President and CEO Michael Horn who was sent to apologize to consumers at a congressional hearing in October. But at the same time, he told lawmakers that top corporate officials had no knowledge of the cheating software. 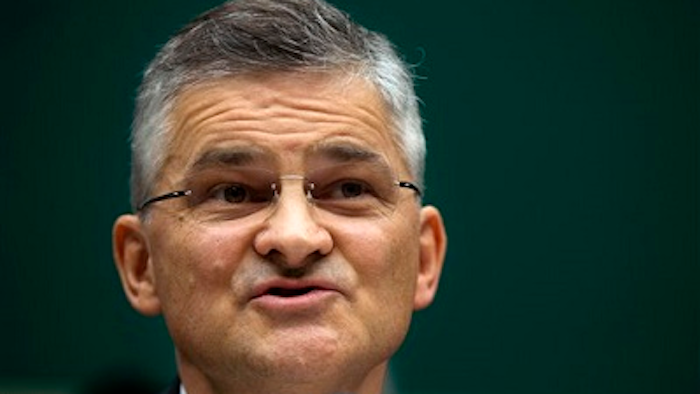 In this Oct. 8, 2015 file photo, Volkswagen of America CEO Michael Horn testifies on Capitol Hill in Washington. Volkswagen’s top U.S. executive is stepping down amid the company’s ongoing emissions cheating scandal. Volkswagen Group of America announced Wednesday, March 9, 2016, that Horn is leaving “to pursue other opportunities effective immediately.” He had been with the German auto maker for 25 years, assuming his most recent post in 2014.
AP Photo/Manuel Balce Ceneta, File

U.S. President and CEO Michael Horn is leaving "to pursue other opportunities effective immediately," the automaker said in a statement. He had been with the German auto maker for 25 years, assuming his most recent post in 2014.

Horn's sudden departure comes as the company continues to grapple with the fallout from its admission last year that nearly 600,000 cars were sold in the U.S. with software that regulators say was designed to cheat on required emissions tests.

The company potentially faces more than $20 billion in fines from state and federal regulators, as well as hundreds of class-action lawsuits filed on behalf of angry vehicle owners. The Justice Department is also conducting a criminal investigation.

It was Horn who was sent to apologize to consumers at a congressional hearing in October. But at the same time, he told lawmakers that top corporate officials had no knowledge of the cheating software installed in 11 million diesel cars worldwide.

"To my understanding this was not a corporate decision, this was something individuals did," Horn said, adding that he felt personally deceived.

A federal judge has given the company until March 24 to reach an agreement with the government on recalling the affected vehicles. U.S. District Court Judge Charles R. Breyer wants to know about available technical solutions to fix the cars and the status of negotiations on a potential settlement with affected owners. Volkswagen has not indicated whether it will be able to meet the deadline.

Volkswagen in September admitted to U.S. regulators that it had used illegal software installed in its so-called "Clean Diesel" engines. The cheating allowed cars to pass laboratory emissions tests while spewing levels of harmful nitrogen oxide at up to 40 times the level allowed when operating on real roads.

The company is negotiating with lawyers for the owners of the defective cars, as well as the Environmental Protection Agency and the California Air Resources Board. Both state and federal regulators will have to sign off on any planned recall.