Earl Johnston always thought he would have plenty set aside for retirement, or could always work a little longer, "but nobody in manufacturing is going to hire a 50-something guy who can't stay on his feet," he said. 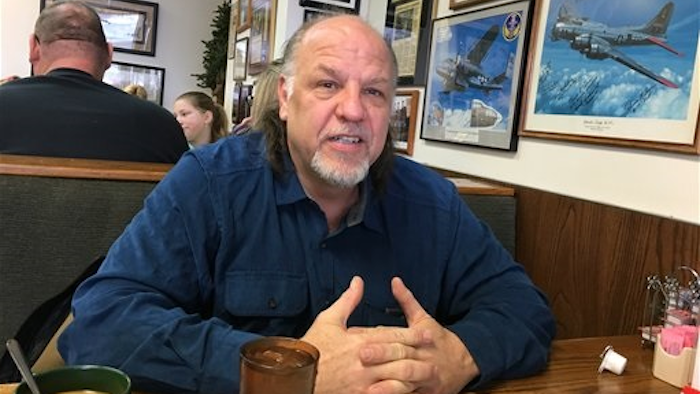 This photo, taken Jan. 17, 2016, shows Earl Johnston in Yipsilanti, Mich. Johnston got his first job when he was 12- years-old, a paper route which he quickly expanded by "buying out" additional routes from other, less industrious, boys. After high school, he enrolled in a program to become an industrial electrician. Increasing numbers of Americans are expecting to work well past the traditional retirement age, and in some cases they are dismissing the idea of retirement altogether. But health and a variety of other factors often get in the way of those expectations.
Adam Allington, via AP

YPSILANTI, Mich. (AP) — Earl Johnston was 12 when he got his first job, a paper route that he quickly expanded by "buying out" additional routes from other, less industrious boys.

After high school, he enrolled in a program to become an industrial electrician.

"With that journeyman's card in my back pocket, I had never had trouble finding work — ever," he said.

Like many people in the prime of their working life Johnston, now 56, always thought he would have plenty set aside for retirement, and if he didn't, he could always work a little longer. "At least up to 65," he thought.

What Johnston didn't plan for was the degenerative spinal condition that made being on his feet for a 12-hour shift all but impossible.

"I could be making lots and lots of money right now, but nobody in manufacturing is going to hire a 50-something guy who can't stay on his feet," he said.

Johnston's story might be chalked up to simple bad luck. But it serves as an example of the rapidly changing expectations that seniors have for being able to work well past traditional retirement age, and in some cases, dismissing the idea of retirement altogether.

According to the 2015 Employment Benefit Research Institute Confidence Survey, the percentage of workers aged 25 and over who planned on working past 65 has increased steadily from 11 percent in 1991 to 36 percent in 2015.

But those expectations aren't always achievable.

The University of Michigan Health and Retirement Study found that 37 percent of respondents didn't reach the retirement age they had set when they were 58.

"The first, and maybe the most obvious explanation people give for early retirement is health," said Boston College research economist Geoff Sanzenbacher, co-author of a working paper investigating causes for this mismatch between retirement expectations and reality.

"People don't fully grasp how big an impact health has on your ability to work. You may be 58 and have some arthritis, but you don't fully appreciate how much that could affect you going forward."

The second most common reason was layoffs or business closings, followed by familial factors, such as a spouse retiring, he said.

The average retirement age has been inching up for years now. People are living longer, tend to be more educated and have better access to white collar jobs that don't require a lot of manual labor. Women are also reaching older age with more skills and longer work histories than their mothers and grandmothers.

Even as roughly two-thirds of workers do make it to the age they planned to retire, a report by the Hamilton Project at Brookings Institution suggests that a growing percentage of them are entering retirement on shaky financial footing.

There's also the perception that working longer is the best way to bridge the gap between retirement needs and resources.

"It's become a kind of Band-Aid solution to growing concerns many workers have about retirement readiness," says Ruth Davis Konigsberg, a contributor to Money.com and a director at Arden Asset Management.

"In some cases, working longer can help, and there certainly are other benefits to working longer, but we can't just extend our working lives indefinitely. There is just too much uncertainty in that scenario."

2018 was going to be a banner year for Karen Hoffmann, 64. That was the year the mortgage on her St. Louis home would be paid off, and she and her husband were planning to retire.

But Hoffman received notice late in 2015 that she was being let go from her job as a senior trainer for Verizon.

"Right now we just have to re-evaluate," she says. "Originally we thought we could go South for the winter for a month or two, now I don't think we'll be able to do that."

Between their savings and Social Security, Hoffmann estimates that she might have enough money to retire a few years early. Still, the prospect of unforeseen health care costs is unnerving. And, if she does take a new job, for less pay, she worries it would change her future Social Security payouts.

"Do I go look for a job? Part of me says yes, but I honestly don't know," Hoffmann said.

"Could I fill up my time with retirement? Sure. I have two grandkids. In that respect, being retired would be nice. But, I don't think I'll ever be ready for the financial side of things."