The region has a unique business landscape. 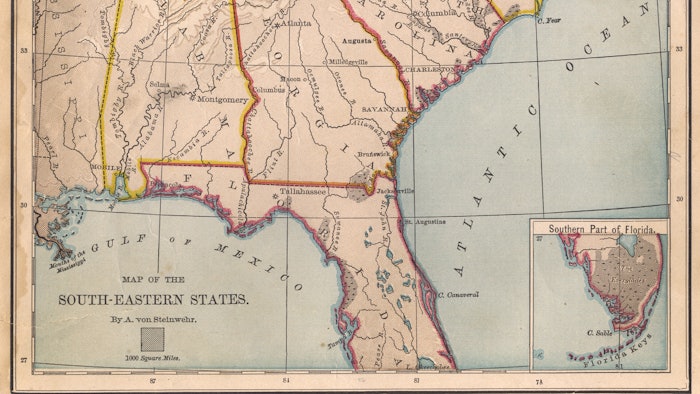 The Manufacturing Extension Partnership's (MEP) mission is to enhance the productivity and technological performance of U.S. Manufacturing.

We are built on a nationwide system of centers located throughout the United States and Puerto Rico. Each center is a partnership between the federal government and a variety of public or private entities, including state, university, and nonprofit organizations.

As the new Southeast regional manager, I decided to take a closer look at commonalities and differentiators among the centers and the states that make up the region.

Is There More Than Geographical Continuity in the Southeast Region

The nine states (except Puerto Rico and Tennessee) that incorporate the Southeast region form a continuous slanted cup along the Atlantic Ocean and Gulf of Mexico pointing toward Puerto Rico with Tennessee at the top of the cup.

This proximity and access to the coast, in addition to social, cultural and historic similarities, resulted in a region with strengths and synergies that create a unique business landscape.

For example, the region generated about 20 percent (over $380 billion) of the USA manufacturing gross domestic product (GDP) in 2014. Also, the Southeast region’s GDP is ~16.7 percent (~$2.1 trillion) of the nationwide GDP of 17.2 trillion dollars of which 13.3 percent came from the manufacturing sector.

It was second only to the finance, insurance, real estate, rental, and leasing sector, which represented 18.8 percent of the total regional GDP. Nationwide, 12.2 percent of the GDP was from the U.S. manufacturing sector. The tier one manufacturing industries in the region are shown in Table 1. Notice the overlap of the different industry sectors between the five to six states that share the same industries. These tier one sectors include between 2,000 to 6,500 manufacturing facilities in the Southeast region.

A key synergy in the region is “Automotive Alley.” During the last 30 years, the region transformed into an automotive manufacturing powerhouse (see Figure 1) that includes 300,000+ employees, 14 OEM’s (red squares) and 1,120 manufacturers and suppliers.

Another strength of the region is the business focus of several of the universities and community colleges, including the University of Tennessee and North Carolina State University, which host MEP centers.

The Centers also include plans to engage with other entities in statewide and/or regional advanced manufacturing initiatives.

Last but not least, the Southeast MEP region hosts a variety of national research laboratories and programs. It is home to two Department of Energy sponsored Manufacturing USA institutes—in Tennessee and North Carolina.

All of these efforts can potentially support small, medium and emerging companies in collaboration with MEP centers. In an upcoming blog post, I’ll highlight the programs and capabilities focusing on areas of common interest within the manufacturing industry that could expand the collaborations with MEP centers and their clients.

The manufacturing future of the Southeast region looks very promising given the diversity and synergies between the states, especially the aligned industry clusters and supporting institutions such as the MEP centers, universities, community colleges, Manufacturing USA institutes, national laboratories and their collaboration with the industrial sector and state agencies.

For example, between 2009 and 2014 the southeast region GDP grew at an annual 3.5 percent rate with manufacturing growing at a rate of 4 percent. Nationwide, the growth rates were 4 percent and 4.3 percent, respectively.

These indicators combined with the continued integration of the MEP centers, Manufacturing USA institutes, national laboratories, industry and state institutions provide an environment of continued growth and prosperity. I look forward to seeing the Southeast region thrive!

Expertise is Not Enough