The configuration made it difficult. 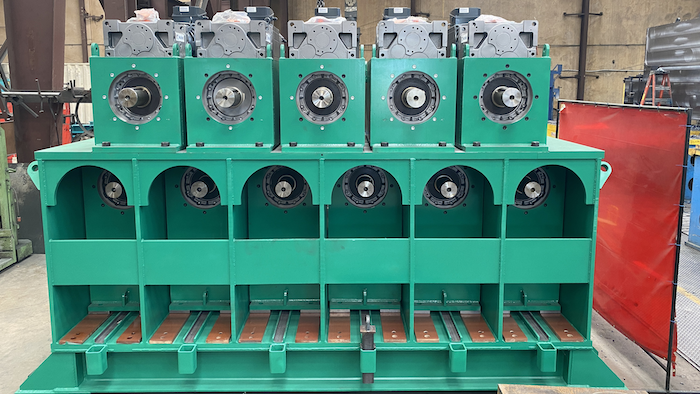 This photo shows the business end of the roller leveler’s drive unit—when installed, a drive shaft will be attached to the end of each gearbox.

Some have said the American steel industry is dead. Not Joseph Savariego, president of Delta Steel Technologies Inc. in Irving, Texas. For more than 55 years, what is now a second-generation manufacturing company has been building and repairing machinery for steel mills across the country, and that’s not about to change.

In fact, entirely new breeds of mini and micro mills have sprung up over the past decade or so, factories that Delta Steel is busy equipping as well. During one recent project, however, Delta Steel ran into a snag.

After delivering the winning bid on a machine known as a roller leveler, Savariego and his design team found that the gearboxes in a critical subassembly had to be placed closer together than they liked. They knew that this configuration would make it difficult for their customer to service the machine in the future, so they decided to reach out to electromechanical solution provider NORD DRIVESYSTEMS for ideas.

Delta Steel Technologies employs 120 people. Some have worked there for more than four decades, and all are proud to support the American steel industry. They design and manufacture a wide range of custom products in a 226,000 sq. ft. facility, including stretch levelers, rotary shears, temper mills, and cut-to-length lines.

All serve to convert rough coils of steel into flat, precision-cut material suitable for use by automakers, appliance producers, and indeed any manufacturer of sheet metal components and assemblies.

The company also refurbishes, remanufactures, and retrofits legacy equipment, performs cylinder and gearbox repairs, does custom machining and fabrication, and offers turnkey installations of their systems. Further, many of these systems are highly automated, using state-of-the-art technology to achieve the greatest throughput possible. There’s more, but put simply, Delta Steel’s goal is delivering whatever the customer needs to efficiently and profitably process steel. Achieving this requires strong supplier partnerships.

Savariego said they’ve worked with NORD DRIVESYSTEMS for a number of years and have always found them to be very responsive, helpful, and creative in their solutions. “Most of the companies out there just throw you a catalog and say, ‘Pick one of these. If it works for you, great, and if it doesn't, we're sorry.’ NORD, on the other hand, has always tried to understand our needs and help us select a product that solves whatever problems we’re facing.”

As its name implies, a roller leveler uses a series of offset, rotating cylinders to make coil steel flat. The material is fed into one end of the machine, which alternately bends the sheet in gradually decreasing "waves" that serve to reduce metallurgical stress and flatten the steel as it passes. In Delta Steel’s design, there are eleven rollers in all, five above the sheet and six below.

Each roller is attached to a driveshaft, and each driveshaft connects to a gearbox driven by its own 150-hp motor. The problem with this particular project was twofold. As mentioned earlier, Delta Steel designers needed to stack the two rows of components one atop the other in order to fit everything into the limited space. This restricted access to the bottom row of drive components, though, so they developed a slide mechanism that would allow technicians to easily disconnect each gearbox and motor combination from the driveshaft and simply pull it back and out of the way for servicing.

Despite this space-saving arrangement, a compact but powerful gearbox would still be needed. For this, they reached out to their local NORD DRIVESYSTEMS representative, Steve Hunter, who put them in touch with application engineer Jeff Wittrock. He recommended an SK5207 series MAXXDRIVE Large Industrial Gear Unit in a parallel axis configuration and 14:1 drive ratio. With a UNICASE one-piece housing, symmetrical design, and extremely high power density for its size, the gearbox would provide plenty of torque along with the performance and service life needed for this demanding application.

"There were definitely some challenges," Savariego said. "For example, if one of the bottom gearboxes were to be damaged, how would you access it without having to remove the ones above it? And even the best gearbox and motor needs routine maintenance, which would have been extremely difficult if we'd gone with a less flexible design. That’s what led us to the sliding mechanism I mentioned earlier, but that meant we had to minimize the driveshaft angle, which in turn required that we keep everything close together. NORD was quite helpful, and willing to help us through the entire process until we reached the optimal design.” Every project is different, Savariego added, noting that details like these must often be worked out after the customer has accepted the preliminary proposal. It’s only as designers delve into the complete requirements that they can understand all of the potential hurdles, making it especially important to partner with suppliers offering a wide range of component options, and backed by experienced support and applications people. “NORD was able to help us transmit a lot of torque in a fairly small package,” he said. “They were also quite helpful in determining the best way to arrange the gearboxes. That’s not to say there aren’t other good gearbox manufacturers out there, but in certain applications, NORD’s service and support stands well above the rest. We’ve enjoyed working with them and will continue doing so.”