The Bloomington facility will be the company's first chocolate processing factory in North America. 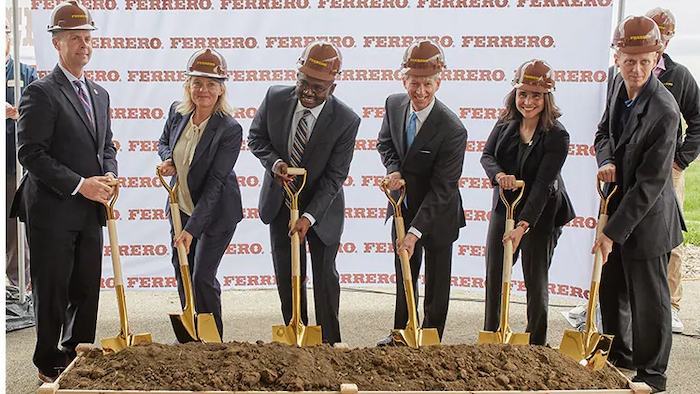 Ferrero North America, part of the global confectionery company the Ferrero Group, broke ground Oct. 13 on a new chocolate processing facility in Bloomington, IL. It will be the Ferrero Group's third facility that processes chocolate, and its first outside of Europe. State and local leaders joined Ferrero at a ceremony to celebrate the occasion, including Acting Director of the Illinois Department of Commerce and Economic Opportunity (DCEO) Sylvia Garcia and Bloomington Mayor Mboka Mwilambwe. Illinois Governor J.B. Pritzker delivered remarks via video.

The new facility is an expansion of Ferrero's existing Bloomington manufacturing center and will produce chocolate for Crunch, 100Grand, Raisinets, and other Ferrero products for the North American market. The $75 million project will add 70,000 square feet to Ferrero's current Beich Road footprint and add as many as 50 new jobs. Annually, Ferrero currently spends nearly $300 million in Illinois, supporting over 1,300 employees and 560 suppliers.

“The ability to process high quality chocolate here in North America is instrumental to building on our important growth in this market, which is advancing Ferrero towards our goal of being a world leader in global confectionery,” said Todd Siwak, President and Chief Business Officer of Ferrero North America. “I am so happy that we are able to reach this important milestone in Illinois, the heart of America’s food and confections industry.”

“With its first-ever U.S. chocolate processing facility, Ferrero will create new jobs and economic opportunity in the Bloomington region, and will carry forward Illinois’ proud food manufacturing tradition,” said Gov. Pritzker. “Companies like Ferrero continue to choose Illinois thanks to our talented workforce and our role as a transportation hub for the nation, which makes our state a number one choice for production, innovation, and global distribution. We thank Ferrero for its vote of confidence in Illinois and look forward to supporting the company’s continued success here.”

“Ferrero’s continued investment in Illinois is a testament to the caliber of our talent, the strength of our infrastructure, and our direct access to markets across the country and around the globe,” said Sylvia Garcia, Acting Director of the Illinois Department of Commerce and Economic Opportunity (DCEO). “Under Governor Pritzker’s leadership, Illinois is committed to upholding our status as the leading Midwest destination for food production and supporting new and existing companies in their plans to innovate, fuel jobs, and produce their household brands from right here in Illinois.”

“We are so fortunate to have a global corporation like Ferrero breaking ground,” said Bloomington Mayor Mboka Mwilambwe. “Their confidence in Bloomington can only strengthen our already vibrant business community.”

Ferrero has made North America a focus for investment in recent years, including the expansion of its North American headquarters in New Jersey, new distribution centers in Pennsylvania, Arizona and Georgia, and significant development of facilities in Franklin Park, Illinois as well as Bloomington. The company’s footprint in the market now totals eight offices and ten plants and warehouses in North America, including a cocoa processing plant in Brantford, Ontario.

Ghafari Associates provided architectural and engineering design services for the bid documents associated with the project. Additionally, Ghafari will provide technical support and on-site construction supervision. The Austin Company is Ferrero's design-build partner responsible for the engineering and construction of the project.

The new facility is set to open Spring 2023.

We've all heard horror stories of e-commerce strategies gone awry, with thousands of dollars spent with nothing to show for it. This new video roundtable gives you the tools you need to get started and be successful with e-commerce. Watch now.
Nov 30th, 2021