The utility issued its second conservation alert since the deadly February blackout. 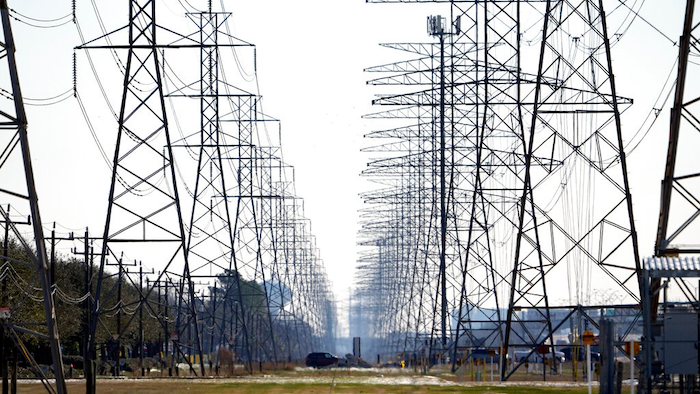 This Tuesday, Feb. 16, 2021 file photo shows power lines in Houston. The electric power grid manager for most of Texas has issued its first conservation alert of the summer, calling on users to dial back energy consumption to avert an emergency. The Energy Reliability Council of Texas issued the alert shortly after midday Monday, saying many forced generation outages and potential record June demand is squeezing the power supply.
AP Photo/David J. Phillip

DALLAS (AP) — On the cusp of summer, the electric power grid manager for most of Texas on Monday issued its second conservation alert since the deadly February blackout, calling on users to dial back energy consumption through Friday to avert an emergency.

The Electric Reliability Council of Texas said many forced generation outages and record June demand has squeezed the power supply. It appeals to users to lower thermostats to 78 degrees and avoid using large electric appliances until demand decreased late in the day.

“We will be conducting a thorough analysis with generation owners to determine why so many units are out of service,” Woody Rickerson, ERCOT vice president of grid planning and operations, said in a statement. “This is unusual for this early in the summer season.”

“We’re currently seeing three to four times the number of forced thermal (steam-powered) generation outages on our system than we would typically expect to see this time of year,” Sopko said in an afternoon telephone conference.

“All of these thermal units are offline due to mechanical failure or the need for repairs," she said.

Also, wind-powered generator output was producing 3,500 to 6,000 megawatts between 3 p.m. and 9 p.m. Monday, about 1,500 megawatts less than what is typically available for peak conditions, according to an ERCOT statement. Solar power was producing more than 5,000 megawatts, Sopko said.

“We want you to know that we share the same concerns of all Texans, and this is a priority to ensure that generators can perform as we head into the summer months," she said.

A megawatt usually powers about 200 homes on a summer day. Summer officially begins on Sunday.

The ERCOT grid is the only one in the nation contained completely within the borders of a single state. That exempts it from federal regulation, but it also isolates it from access to supplemental power from the nation's other power grids.

Heat-index readings topped 100 degrees in much of Texas on Monday. ERCOT already had issued one conservation alert on April 13 when with temperatures ranging from the 50s to the lower 80s.

Despite experts who say Texas’ power grid remains vulnerable, Republican Gov. Greg Abbott has declared that new reforms “fix all of the flaws” that caused a deadly February winter blackout.

More than 4 million people lost power when temperatures plunged into single digits over Valentine’s Day’s weekend, icing power generators and buckling the state’s electric grid. State officials say they have confirmed at least 151 deaths blamed on the freeze and resulting outages, but the real toll is believed to be higher.

Texas lawmakers made significant changes during the recent legislative session that include mandates to “weatherize” power plants for extreme temperatures and new processes to avert communication failures. However, energy experts have said the reforms do not go far enough to assure a similar catastrophe won’t happen again in one of America’s most booming states.