The ban adds to a flurry of sanctions imposed against Chinese officials, companies and goods over human rights, security and other complaints. 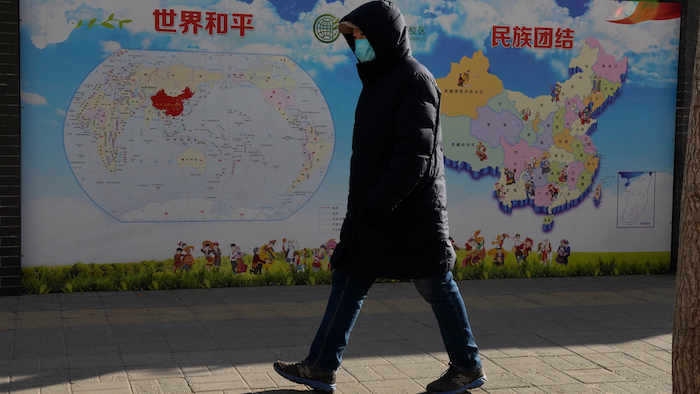 A man walks past a poster with the slogans "World Peace" and "Ethnic Unity" in Beijing, China on Jan. 11.
AP Photo/Ng Han Guan

BEIJING (AP) — China on Thursday demanded Washington drop a ban on cotton and tomato imports from its Muslim northwest over complaints they are produced by forced labor, which a spokesman dismissed as the “lie of the century.”

The ban announced Wednesday adds to a flurry of sanctions imposed by the Trump administration against Chinese officials, companies and goods over human rights, security and other complaints.

Its commercial impact is unclear, but Beijing is sensitive to criticism about the Xinjiang region, where more than 1 million Uighurs and other Muslim minorities have been confined in detention camps. Beijing denies mistreating them and says it is trying to promote economic development and stamp out radicalism.

“The so-called forced labor issue is a ‘lie of the century’ fabricated out of thin air,” said a foreign ministry spokesman, Zhao Lijian. He accused the United States of wanting to hurt Chinese companies and the country’s development.

“We urge the U.S. side to respect facts, immediately withdraw its wrong decision and stop interfering in China's internal affairs under the pretext of Xinjiang-related issues,” Zhao said.

Zhao said Beijing would “safeguard its interests and dignity” but gave no indication of possible retaliation. The government has made similar statements following earlier U.S. sanctions but took no action.

Xinjiang is a major cotton supplier to clothing producers in China as well as Bangladesh, Vietnam and other countries. That makes the U.S. ban a potential challenge for retailers or clothing brands that will be required to ensure their products are free of Xinjiang cotton.

Zhao warned the ban would disrupt such global supply chains.

“It is detrimental to the interests of enterprises and consumers of all countries, including the United States itself,” he said.

Xinjiang also is a major supplier of tomato paste to foreign food brands, but its main markets are Europe and the Middle East.

The United States imported about $9 billion worth of cotton goods directly from China last year, according to the U.S. government.

Earlier, Washington imposed a ban in December on imports from a company that controls about one-third of Xinjiang cotton production. The government said it has stopped shipments worth about $2 million. Canada and Britain also have announced plans to block imports of goods produced by forced labor.

The Trump administration has blocked imports from individual companies linked to forced labor in Xinjiang. It has imposed travel bans and other sanctions on Communist Party officials with prominent roles in the campaign.