Enbridge said it would continue to operate the oil pipeline through the Straits of Mackinac. 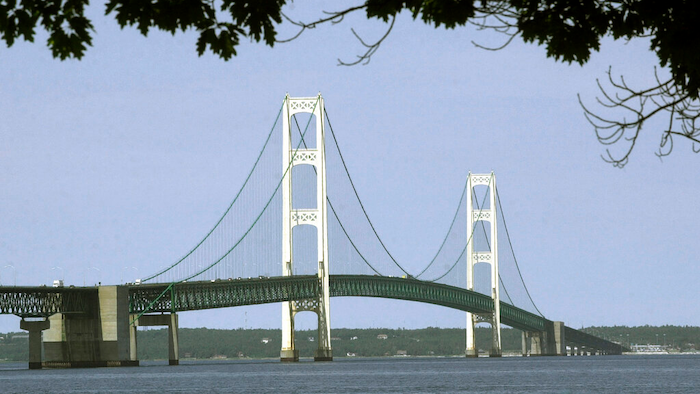 TRAVERSE CITY, Mich. (AP) — Enbridge said Tuesday it would defy Michigan's demand to shut down an oil pipeline that runs through a channel linking two of the Great Lakes, contending that Gov. Gretchen Whitmer's decision was based on bad information and political posturing.

The Democratic governor in November moved to revoke a 1953 state easement that allowed part of the Canadian company's Line 5 to be placed along the bottom of the Straits of Mackinac. Saying Enbridge had repeatedly violated the terms and put the lakes at risk, Whitmer gave the company 180 days — until May 12 — to turn off the flow.

Enbridge filed a federal lawsuit challenging the order shortly after it was issued. Vern Yu, president for liquids pipelines, gave a point-by-point-response to the state's termination notice in a letter Tuesday and said it wouldn't close Line 5.

"Our dual pipelines in the straits are safe, fit for service and in full compliance with the federal safety standards that govern them," Yu said.

Mike Koby, vice president of U.S. operations for the Calgary, Alberta-based company, said Whitmer had overstepped her authority. Enbridge has “no intention of shutting down the pipelines based on these unspecified allegations," Koby said in an interview.

A message seeking comment was sent to Whitmer's office.

Line 5 is part of Enbridge’s Lakehead network, which carries oil and liquids used in propane from western Canada to refineries in the U.S. and Ontario. The pipeline moves about 23 million gallons (87 million liters) daily between Superior, Wisconsin, and Sarnia, Ontario, traversing parts of northern Michigan and Wisconsin.

The underwater section beneath the Straits of Mackinac, which connects Lake Huron and Lake Michigan, is divided into two pipes that Enbridge says are in good shape and have never leaked.

Whitmer, however, agrees with environmentalists, Native American tribes and other critics who contend they're vulnerable to a catastrophic spill.

Enbridge reached an agreement with then-Michigan Gov. Rick Snyder, a Republican, in 2018 to replace the underwater portion with a new pipe that would be housed in a tunnel to be drilled beneath the straits.

The company is seeking state and federal permits for the $500 million project, which is not affected by the shutdown order.

Whitmer's order said granting the easement in a busy shipping lane vulnerable to anchor strikes was a mistake and Enbridge had made things worse, repeatedly violating a requirement that the pipelines rest on the lake bed or have other supports at least every 75 feet (22 meters).

The company also has failed to ensure that protective coating hasn't worn off and has allowed the pipes to bend excessively in some places, the order said.

In his response, Yu said problems with pipeline supports and coating had been fixed years ago and that Enbridge had taken numerous steps to prevent contact with vessel anchors after one was dragged over the pipelines in April 2018.

The allegation about bending appears to have been based on the state's flawed reading of data that could have been cleared up if officials hadn't refused to discuss technical issues over the past two years, he said.

“The governor's notice is actually based on inaccurate and outdated information that ignores the current condition of the dual pipelines” that federal regulators have described as safe, Koby said. He accused the state of bias, adding that "for the governor this is a political issue, pure and simple.”