Nat Geo details the incredible engineering and tech crews that assembled the spacecraft, rover and helicopter, as well as a critical flaw that almost grounded Perseverance. 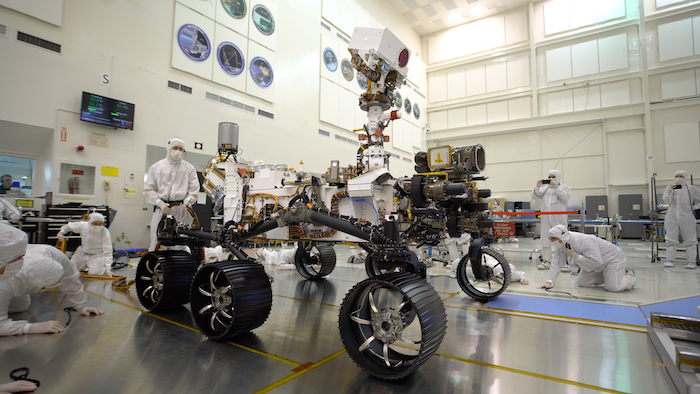 Precision is pretty much a given when discussing anything aerospace, especially when the craft in question is heading to another planet. That said, I have a new appreciation for the term after getting a sneak peak of the National Geographic Channel’s Built for Mars: The Perseverance Rover.

The engineering embedded within this historic mission is obviously impressive. However, the show’s look at the assembly of the spacecraft delivering the rover, the Perseverance rover itself, its drilling/sampling system, and the attached rotary drone (small helicopter) left me in awe of the patience, talent and courage it takes to be a part of the crews putting NASA’s latest and greatest together.

The Flight Technician teams are really the heart of the story. These are not engineers. They  are simply the best mechanics on the planet. With varying backgrounds that include industrial  machine building and motorcycle repair, these individuals take on a role where they exchange oil rags for double layers of gloves, facemasks and body garments before taking an air shower and entering Ultra Clean Rooms.

The sterility of their environment, which is critical in ensuring an absolute minimal level of earth-based contaminants are taken to Mars, creates a number of unique challenges. Imagine changing a tire while touching nothing but the tools being used to perform that function. Imagine knowing that over or under-torquing a bolt could scrap a $2.5 billion project. Imagine, as one member of the Assembly Test and Launch Operations (ALTO) team recalls, being exhausted after a day when all he accomplished was placing six screws.

On the surface, this might seem like another example of an over investment in human capital by a government agency. But trust me, I’ve never had a better appreciation of the need to have two people placing a wheel on an axle while a dozen people observed from every angle. As another flight tech put it, assembly work on the Perseverance demands sterile contortionists.

In addition to the pressure of the environment, the challenges of assembling a spacecraft in awkward cleanroom gear, and the critical nature of not making a mistake, there’s also the looming deadline that needed to be met. The window for the launch, in leveraging the orbital proximities of Earth and Mars, is only open every 26 months.

A critical issue that threatened this window is also discussed, and how testing engineers were able to overcome a flaw that, ironically enough, stemmed from overcleaning parts of the robotic drilling and sample-gathering system. If this issue wasn’t addressed, the most important part of Perseverance’s mission – gathering samples from Mars surface and bringing them back to Earth – would not have been possible and placed the entire project in jeopardy.

Perseverance is set to touch down on the Red Planet at about 4:00 EST today. The special, Built for Mars: The Perseverance Rover lands on the Nat Geo channel tonight at 8:00 EST.