Legal Challenge to $400M Grain Elevator Can Go Ahead

Opponents sued over “corrupt rezoning” of the land decades ago. 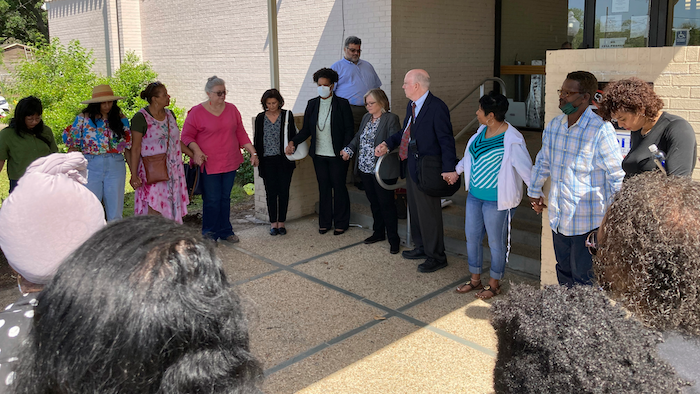 Opponents of a grain elevator proposed along the Mississippi River pray outside a courthouse in Edgard, La., April 28, 2022.
AP Photo/Rebecca Santana

EDGARD, La. (AP) — Descendants of slaves who lived and toiled in southeastern Louisiana won a key ruling Thursday allowing their legal challenge to go forward against a $400 million grain elevator planned along the Mississippi River, although the company behind the project said it would likely appeal.

Greenfield Louisiana LLC, which intends to build the terminal between New Orleans and Baton Rouge, had been pushing a court to dismiss a lawsuit brought by the Descendants Project, which is suing the regional government over what it calls the “corrupt rezoning” of the land for industrial use decades ago. Greenfield had argued on different grounds that the lawsuit should be thrown out. But during the hearing Thursday Judge J. Sterling Snowdy said he would deny all those grounds and would explain his reasoning in a more detailed ruling within days.

Two sisters, Jo and Joy Banner, formed the Descendants Project and have been leading the opposition to the grain elevator. They and about 30 supporters gathered outside the courthouse afterward to celebrate.

“We’re very happy that we can move forward,” said Joy Banner. “This was a huge win.... a huge step in our process.”

The ruling means that the Descendants Project can move forward with things like trying to depose figures in the company trying to build the grain elevator. Their lawsuit also raises questions about the project's environmental risks and challenges its expected proximity to homes that have stood nearby for generations.

The lawyer representing Greenfield, Louis E. Buatt, said after the hearing that company officials would review the judge's written ruling when it's issued in coming days and would then likely seek a review by the appeals court.

“Greenfield is moving forward with our project after earning overwhelming support from the community, the port and public officials on our effort to bring clean jobs and tax support for the residents," he said in a statement, adding that he didn't think the legal maneuvering would ultimately hold up the project.

Buatt said although the judge denied all three of the company's arguments for dismissing the case outright — the judge did indicate that its assertion that the statue of limitations has already run out might have merit going forward. A representative for the parish said they could not comment on pending litigation.

The Descendants Project has been fighting the placement of the grain elevator, saying some homes in the nearby town of Wallace where they live would be only 260 feet (less than 80 meters) away from the project, which the lawsuit states would include “a conveyor structure nearly as tall as the Statue of Liberty.”

The lawsuit also raises questions about environmental hazards such as dust from the facility posing a health hazard to the predominantly Black residents of Wallace and whether the grain terminal would disturb possible slave burial grounds. The terminal would also be located not far from the Whitney Plantation, which documents the history of slavery and has become an important tourist destination.

The company has said the grain elevator would be clean, safe, provide jobs and has wide support in the community.

At issue is a zoning change made decades ago. The area zoning was changed in 1990 when Formosa Plastics Corp. wanted to build a rayon plant at the site. Formosa, however, dropped its plans in 1992 and six years after the land was rezoned, a former parish president, Lester Millet Jr., was convicted of charges including extorting $200,000 from the person he chose to broker the land sale.

The Descendants Project has essentially argued that the industrial zoning was the result of Millet's corruption and should be thrown out. Lawyers for the parish and Greenfield have argued that Millet was only one part of the process and that the parish council also approved the rezoning. They've also argued that too much time has passed to challenge the rezoning.

The area along the Mississippi River from New Orleans to Baton Rouge and known locally as the “river parishes” was once the site of plantations that stretched from the river back to the farmland where crops — often sugarcane — were grown and harvested by slave labor. In more recent decades industrial plants have been built up and down the river — a development criticized by environmental groups that contend they are a health hazard for the region and the people who live there.