The state is known for its craft beer and high-grade marijuana, but it's keeping the two apart, for now. 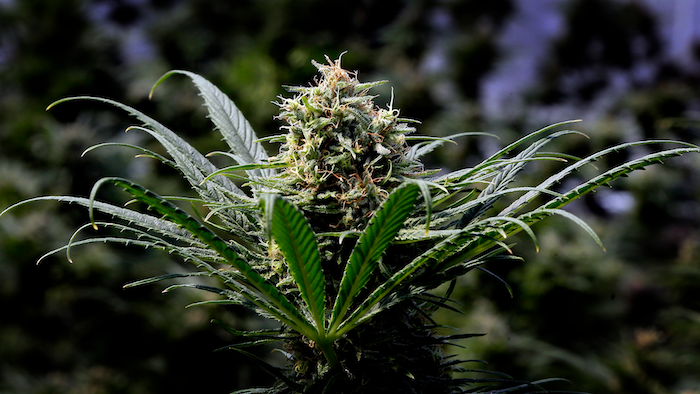 This May 24, 2018, file photo shows a marijuana plant in Oregon. In a new ruling, the Oregon Liquor Control Commission, which regulates both alcoholic products and recreational marijuana, says beer and other alcoholic drinks as of Jan. 1, 2020. may not contain either THC, the psychoactive component of cannabis, or CBD, the non-psychoactive part that is said to relieve stress and pain.
AP Photo/Don Ryan, File

SALEM, Ore. (AP) — Oregon is renowned for its craft beer and increasingly for its high-grade marijuana, but the state is keeping the two apart — for now.

In a new ruling, the Oregon Liquor Control Commission, which regulates both alcoholic products and recreational marijuana, says beer and other alcoholic drinks as of Jan. 1 may not contain either THC, the psychoactive component of cannabis, or CBD, the non-psychoactive part that is said to relieve stress and pain.

Mark Pettinger, spokesman for the agency, cited concerns raised by the U.S. Food and Drug of potential liver damage from CBD, also known as cannabidiol.

“We've wanted to address the issue of CBD getting into alcohol and because there are a lot of unknown unknowns about the effect of taking CBDs," Pettinger said Friday. "There's very little scientific evidence. People are using them for wellness, but how they interact with other substances, not a lot is known.”

One prominent CBD-infused beer, Two Flowers IPA, was popular in The EastBurn, a Portland pub, according to Michael Fritz, one of the owners.

The website of the brewery that made the beer, Coalition Brewing of Portland, said the CBD's “bitter grassiness augments the hop bitterness, while the citrusy terpenes in the CBD mirror the aromatics and hop flavors.”

For his part, Fritz said he didn't notice any additional effect from the beer besides the alcohol.

Coalition Brewing recently went out of business, Fritz said, adding that his own customers drained the last of the CBD-infused beer 10 days ago.

“It was a really good seller for us,” Fritz said.

Pettinger said he didn't know of any other Oregon brewery that makes CBD-infused beer.

He said that until federal agencies establish regulations surrounding CBD, that his agency felt it needed to step in and impose the ban. The Oregon agency will next work on banning a bar from mixing a non-alcoholic CBD beverage on the premises with an alcoholic beverage to create a CBD cocktail.

Oregon has been at the forefront in efforts to legalize marijuana. It was the first state to decriminalize personal possession, in 1973; legalized medical marijuana in 1998 and recreational use in 2014. But Oregon is in a bind because federal regulations surrounding CBD, which is derived from hemp, have not caught up with the legalization of hemp on the national level.

Merkley told reporters Thursday he is seeking an additional $2 million in the nation's spending bill to assist the FDA in developing regulations for CBD oil.

Pettinger noted that the U.S. Alcohol and Tobacco Tax and Trade Bureau, or TTB, which approves the formula for any kind of alcoholic beverage, has not approved the use of CBD in any drinks.

“We’re kind of treating it that we’ll kind of have to lay low and not produce it for a while,” brewery spokesman Drew Vetere told the Burlington Free Press.