Considerable uncertainty is clouding this year’s celebration of the idiosyncratic wine, known for its youth rather than its age 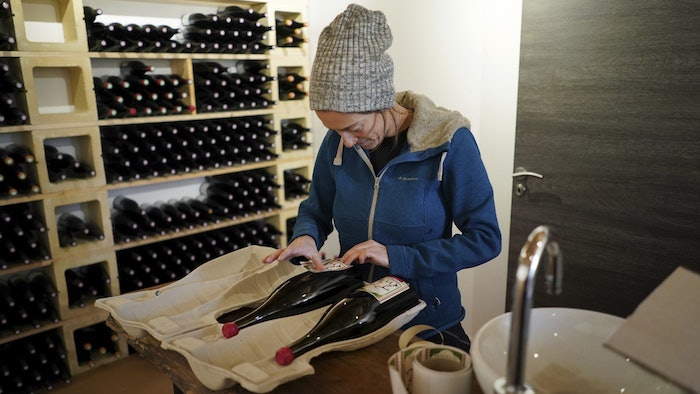 In this photo taken on Wednesday, Nov. 13, winemaker Claire Chasselay lays the labels on bottles of wine in her cellar in Chatillon d'Azergues, in the Beaujolais region, eastern France.
AP Photo/Laurent Cipriani

CHATILLON, France (AP) — Celebration is the mot du jour in France’s Beaujolais region on the third Thursday of November, when winemakers and sellers uncork the season’s Beaujolais Nouveau with feasting and fanfare.

But considerable uncertainty is clouding this year’s celebration of the idiosyncratic wine, known for its youth rather than its age, as the French wine industry finds itself increasingly squeezed by unfavorable geopolitics and turbulent markets.

New American tariffs are threatening profits. Brexit looms. Unrest in Hong Kong has shaken that lucrative market. And China is turning to Chilean and Argentine wines instead.

“Today, world commerce is complicated, especially in a period where the competition is strong,” Dominique Piron, president of the Beaujolais winemakers’ association, told The Associated Press.

Beaujolais, a region spanning 55 kilometers (34 miles) north of Lyon, has spent decades marketing its wines globally. It now exports to more than 110 countries, according to statistics from Vinescence, a wine production company working with 310 winemakers in the area.

Beaujolais Nouveau has seen remarkable success. Half of the wine is exported, notably to Japan, the United States, and the United Kingdom.

Some connoisseurs scoff at the young, inexpensive variety, a proud newcomer amid renowned wines in Burgundy to the north and in Beaujolais itself.

Beaujolais Nouveau producers and defenders, however, say their wine buoys the regional economy and constitutes a significant material and cultural export for France. During the first eight months of 2019, it led French wine regions in exports, according to Piron.

“It’s a wine that goes with most cuisines in the world — very easy to match, even with spices,” he said.

French authorities first designated the appellation in 1951, allowing Beaujolais winemakers to sell wine from that autumn’s grape harvest a month ahead of the usual mid-December start date.

The wine — light, fruity, and not too alcoholic — lends itself to early consumption, producers say. And the time peg lends itself to parties. Producers have marketed it with the holiday season, opening sales a month before Christmas, and a week before Thanksgiving in the United States.

Winemaker Franck Duboeuf will kick off this year’s season in Houston, courting buyers in a country whose government just slapped tariffs on his products. The Trump administration imposed a 25% import tax on most French still wines last month as part of a trade spat with the European Union over illegal subsidies for the aircraft giant Airbus.

Orders had already been set, and places on planes or boats reserved, for this year’s Beaujolais Nouveau by the time the tariffs took effect. Producers said they struck up arrangements to shoulder part of the cost themselves — and distribute most of the rest along the supply chain — in order to retain their American clientele.

On top of the tariffs, uncertainty lingers around trade with the United Kingdom, whose Dec. 12 election will determine the future of Brexit. When and how Brexit takes shape could impact the wine trade.

Changing tastes complicate the picture further. The Japanese, who were buying a “tsunami” of Beaujolais a decade ago, seem to be losing their appetite for the wine, Piron said.

Twelve years ago, French winemakers sold one bottle of Beaujolais Nouveau for every 12 inhabitants in Japan — a total of 12 million bottles per year, according to Piron. Now, Japan imports about half that number.

“It was enormous. It could not have lasted. Because at any moment, trends pass, fashions change,” Piron said.

As once-friendly international markets shrink, some Beaujolais Nouveau producers are turning to new ones like Brazil and Portugal, Duboeuf said.

Others, like winemaker Claire Chasselay, are orienting their businesses toward local consumers instead.

While big producers have bought up many smaller operations in the region, the Chasselay family, which has run vineyards north of Châtillon since the 15th century, seeks to buck that trend.

The Chasselays decided two decades ago to stop spraying their vines, pre-empting the preference for organic products that has gripped younger consumers in recent years and placed pressure on winemakers to adapt their growing techniques.

Though they exported 6,000 of the 22,500 bottles of Beaujolais Nouveau they sold this year, Chasselay prefers to see her wine on nearby shelves and tables.

“It’s important that you enjoy eating at the restaurants that sell your wine, and that you know the people,” she said. “It’s also about that: the pleasure, above all, of the conviviality in your work.”

She loaded one of the season’s last orders into her van and drove it just 17 kilometers (11 miles) to one of her customers — the wine shop and restaurant of Gaetan Vial in Charbonnières-les-Bains.

Swirling the light red around in his mouth, Vial pronounced it “top-notch.”

Brexit Has Wine Exporters in a Fog