The pizza chain said its North American same-store sales grew for the first time in two years in the July-September period.

At the very least, it was a brighter third quarter.

The Louisville, Kentucky-based pizza chain said its North American same-store sales grew for the first time in two years in the July-September period. Sales at locations open at least a year — a key metric of a retailer's health — were up 1%.

Papa John's announced in March that O'Neal would serve as a pitchman. The move was part of a larger effort to repair the damage after the company's founder and namesake, John Schnatter, made racially insensitive remarks. Schnatter resigned as CEO and chairman in 2018.

O'Neal began appearing in ads in September. He also joined the company's board and invested in nine restaurants in the Atlanta area.

Papa John's President and CEO Rob Lynch said the campaign — which also included ads highlighting the diversity of Papa John's franchisees and employees — is paying off.

"I do think we're starting to turn the corner on consumer sentiment," Lynch said on a conference call Wednesday with investors and analysts.

International same-store sales rose 1.6%. Papa John's has 5,343 restaurants in 49 countries. More than half are in North America.

Lynch said a combination of new customers, more repeat business and higher spending per visit drove the sales increase. He said new partnerships with third-party delivery services like DoorDash are not yet contributing to that growth but remain an important part of the business.

Papa John's reiterated its full-year earnings guidance, with expected earnings in the range of $1 to $1.20 per share. 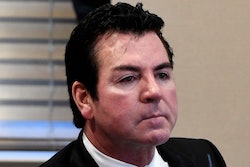 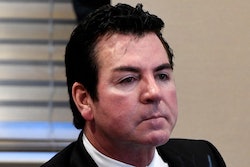 Papa John's Founder Out as CEO