South Korea is deploying snipers and flying drones along its border to stop wild boars from spreading swine fever from rival North Korea. 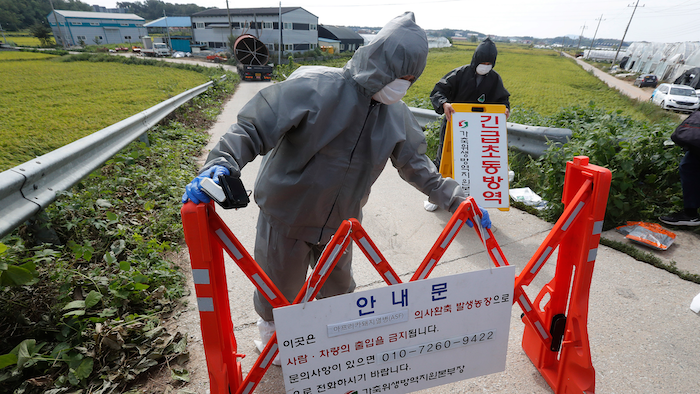 SEOUL, South Korea (AP) — South Korea is deploying snipers, installing traps and flying drones along its border as it ramps up efforts to stop wild boars from spreading swine fever from rival North Korea. African swine fever, fatal to hogs but no threat to humans, has wiped out pig herds in many Asian countries. Feral hogs are thought to be a main reason for its spread, and North Korea has been snubbing the South's repeated calls for joint quarantine efforts, officials say.

South Korea has culled about 154,500 pigs in the past month, all in farms near the North Korean border. North Korea hasn't released any detailed reports on the disease, but South Korea's spy agency says that pig herds in one North Korea province were "annihilated." North Korea observers in Seoul say the pork prices in markets there have soared.

A look at African swine fever in North and South Korea.

North Korea first reported an outbreak in May after widespread deaths of pigs in neighboring China. Chinese officials say farms there have slaughtered at least 1.17 million pigs while trying to control the disease since August 2018.

North Korea told the World Organization for Animal Health that 77 of 99 pigs at a farm in its Jagang province, which borders China, died of the disease. The remaining 22 pigs were culled. North Korea said it's fighting hard to stop the disease's spread, but has not reported any other outbreaks.

Suh Hoon, director of South Korea's National Intelligence Service, told lawmakers in a private briefing last month that African swine fever has spread across North Korea. Pig herds in North Pyongan province, north of the capital Pyongyang, have been "annihilated" and people were complaining about the lack of meat, lawmakers said he told them.

North Korea monitoring groups say the disease occurred in North Korea well before May. South Korea confirmed its first outbreak in the border town of Paju on September 17. It has since reported 13 more cases near the border and culled 154,500 pigs, including all hogs in Paju.

Failure to contain the disease would be potentially devastating for South Korea's huge pork industry. The consequences would be much worse for the chronically food-scarce North. South Korean officials say North Korea had about 2.6 million pigs in 14 government-run or cooperative farms before the disease's outbreak.

Cho Chung-hui, a former North Korean official in charge of livestock issues who fled to South Korea in 2011 says pork accounts for up to 80 percent of protein consumption for North Korea's 25 million people. Many North Korean households raise and sell a pig or two each year to be able to buy rice since rationing systems are in shambles.

A 220-pound hog can be sold to buy about 330 pounds of rice, enough for a family for a year, Cho said. He said North Korean animal health officials and farms do not slaughter animals even if they're sick.

South Korea's own risks are somewhat contained by the fact that most of its 6,300 pig farms, raising some 11 million hogs, are indoor facilities. The country has ample experience with fighting animal diseases after dealing with numerous foot-and-mouth outbreaks since the 2000s.

African swine fever spreads easily through contact with infected animals, carcasses, manure and contaminated substances such as feed, clothing and vehicles. The Koreas' 155-mile border is the world's the most heavily fortified with barbed wire fences installed in minefields, but South Korean officials and experts say wild boards could still roam in and out of North Korea by swimming across rivers.

Those rivers could also spread the disease if contaminated by carcasses or runoff from affected farms, says Sur Jung-hyang, a professor of veterinary medicine at Seoul's Konkuk University. A powerful typhoon with torrential rains in September likely caused runoff of contaminated soil and water from North Korea in early September, Cho said. Insects and rats could also spread the virus, he said.

South Korea's Ministry of Environment said that samples taken from seven dead wild boars found on the southern side of the border have tested positive for African swine fever. Whatever the source of the South Korean outbreaks, experts say controlling movements of wild boars is crucial.

To stop the disease from spreading, South Korea's military on Tuesday said it has deployed snipers and civilian hunters to search for and kill wild boars in border areas. They will work in shifts around the clock, using night-vision goggles to spot the animals when it's dark, which is when they are most active.

The military will also try flying drones equipped with thermal cameras to monitor areas for wild boars and will use helicopters to transport carcasses and other samples to labs more quickly, the Defense Ministry said.

Authorities have installed hundreds of traps and plan to install more barbed-wire fences to stop wild boars from reaching pig farms. Thousands have been assigned to enforce quarantines and beef up biosecurity practices at border farms; 2,000 checkpoints have been set up to restrict movements of people and livestock and decontaminate vehicles.

North Korea would have much less effective quarantine efforts, the experts said. When he was working in North Korea, Cho said the country did not have any disinfection trucks. It still appears to lack any. "Even in China, there have been problems about people cooking and eating infected pigs. It would have been the same situation in North Korea," Sur said.

Some claim fires at these plants are being used to create food shortages.
May 4th, 2022
Follow Us
Most Recent