Consumers have no idea the crab on their plates was caught in oil-soaked water. 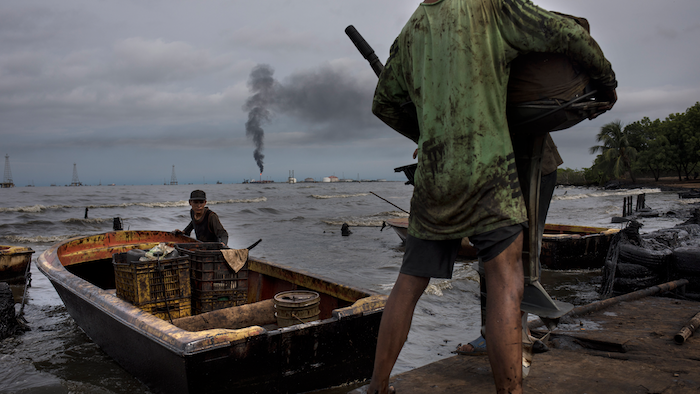 CABIMAS, Venezuela (AP) — Nobody lives as closely with the environmental fallout of Venezuela's collapsing oil industry as the fishermen who scratch out an existence on the blackened, sticky shores of Lake Maracaibo.

The once prized source of vast wealth has turned into a polluted wasteland, with crude oozing from hundreds of rusting platforms and cracked pipelines that crisscross the briny tidal bay. Much of it coats the fishermen's daily catch of blue crab that has to be scrubbed clean before it's shipped to market in the United States and elsewhere.

The sludge smears fishing boats, clogs outboard motors and stains nets. At the end of each sunbaked workday, fishermen wash oil clinging to their hands and feet with raw gasoline. They say the prickly rash in their skin is the price of survival. "This seems like the end of the world," said 28-year-old Lenin Viera, acknowledging the hard reality hundreds of fishermen like him face near the city of Cabimas: If they don't work, their families don't eat.

The world's largest crude reserves fueled an oil boom making Venezuela — a founding member of OPEC — one of Latin America's richest nations through the 1990s. The lake's namesake city, Maracaibo, with more than a million people earned the nickname "Venezuela's Saudi Arabia" for its high-end restaurants, luxurious shopping and bright lights adorning an 5.4 mile bridge spanning the lake.

But the boom has since turned to bust. Venezuela's production nationwide has crashed to one-fifth of its all-time high two decades ago. Critics blame the socialist revolution launched by the late, charismatic Hugo Chavez. His successor, President Nicolás Maduro, accuses the "imperialist" U.S. of leading an economic war bent on destroying his socialist nation.

Environmentalists say Lake Maracaibo was first sacrificed in the name of progress starting in the 1930s, when a canal was excavated so bigger oil tankers could reach its ports. Sea water flowed in, killing freshwater wildlife, such as some plants and fish. In a second blow, agriculture surged to meet the growing food demand, discharging fertilizer runoff into the lake, further ravaging the ecosystem with algae blooms.

Venezuela's communications ministry and the head of Venezuela's state-run oil firm PDVSA didn't respond to written requests for comment for this story.

Today, the lake is an apocalyptic scene that's getting worse as oil-soaked gunk of trash and driftwood lines its downwind shore. A breeze running across the fetid banks sends the headache-inducing smell of petroleum from perpetual oil spills through the waterside villages of simple cinderblock homes with corrugated metal roofs, exposing people who depend on the lake for food and jobs.

This is not what 37-year-old Yanis Rodríguez envisioned for himself when he started fishing commercially as a teenager. He used to dream of one day buying a new car and sending his eight daughters to private school. "But not anymore," said Rodríguez, who lives on rationed electricity and struggles to find sources of clean water for washing, cooking and drinking. "Everything is going from bad to worse."

Aside from potential long-term health risks from the polluted water, the dangers can be immediate. An explosion badly burned three fishermen recently when they fired up their boat's motor near a natural gas leak that bubbles up from the bottom of the lake, engulfing them in flames.

Along a polluted shoreline called Punta Gorda one sweltering afternoon, a crew hauled in its catch of crabs — introduced to U.S. markets after a Louisiana oilman in 1968 spotted large numbers in the lake's oil fields and told his brother in the seafood business.

On the count of three, the barefoot fishermen leaned their shoulders into the rear of their boat, sliding it ashore over the spilled oil. In pairs, they carried heavy crates to the scale as the crabs clambered to escape, claws raised in self-defense.

Fishermen picked out oil-coated crabs from the bunch, tossing each one into buckets. Their wives, seated in the shade of a fishing hut, used toothbrushes and rags to clean them — sometimes shrieking in pain from being pinched.

The crabs were then weighed and trucked to processing plants for their eventual shipment to consumers in the United States, neighboring Colombia and locally in Venezuela, who have no idea the crab on their plates was caught in oil-soaked water.

Cornelis Elferink, a professor of pharmacology and toxicology at the University of Texas Medical Branch at Galveston, said consumers occasionally exposed to oil-soaked crab don't likely face a health risk. Elferink hasn't inspected Maracaibo's fishing industry, but he led a five-year study of seafood contamination after the 2010 Deepwater Horizon disaster in the Gulf of Mexico.

Rather, the Venezuelan fishermen are the ones at risk from persistent long-term exposure, he said. The oily water, petroleum fumes and daily diet of the contaminated seafood expose the local villages to a host of potential health problems such as respiratory illnesses, skin lesions and even cancer, he said.

"The Venezuelan fisher folks are living a hellacious existence," Elferink said. "They're at the epicenter."

Simon Bolivar, 53, said he had been fishing in Lake Maracaibo since age seven. Like his fellow fishermen, he ends his workday plunging each foot into a bucket of gasoline, then rinsing oil from his hands and face. Bolivar says he's become used to the sting.

Amid Venezuela's political crisis and food shortages, he's lost 46 pounds in the last few years, relying mainly on crabs and other seafood he catches from the lake to feed his family. "We should be afraid," said Bolivar, named for Venezuela's heroic founding father. "If we don't go fishing, we won't catch anything. Then, what will eat? No one's going to come and rescue us."