A semi-trailer crash scattered cans of a brew banned by the faith. 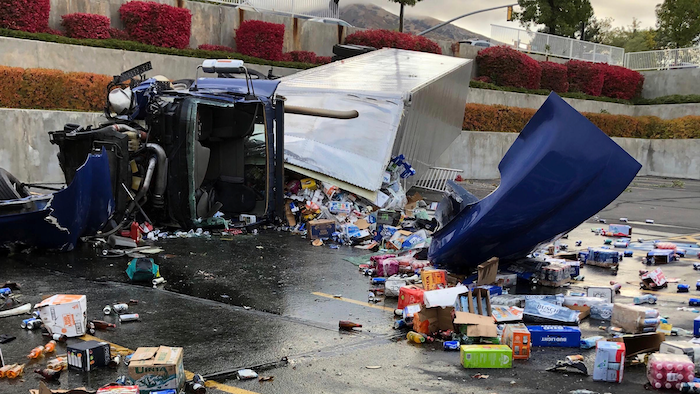 A semi-trailer driver, hauling beer, suffered serious injuries after his vehicle rolled over and crashed in a parking lot of a church in Sandy, Utah.
Derek Petersen/KSL-TV - The Deseret News via AP

SALT LAKE CITY (AP) — Cans of beer litter the parking lot of a church of The Church of Jesus Christ of Latter-day Saints in a Salt Lake City suburb after a semi-trailer crashed that was carrying cases of brew banned by the faith.

Sandy Police Sgt. Jason Nielsen said the semitrailer veered and fell from a road and into the church's parking lot after it was hit by a pickup truck that ran a red light on Thursday. Beer cans were strewn across the empty church parking lot.

One of the faith's key rules is a ban on members drinking alcohol. Nielsen says the semitrailer driver was left with injuries that were not life-threatening.

The pickup truck driver wasn't hurt. Authorities haven't determined if he will be cited. The church building wasn't damaged.

The U.S. is waking up to a labor shortage partly fueled by a slowdown in immigration.
May 9th, 2022
Follow Us
Most Recent