Bananas were depicted sunbathing while reclining in a chaise. Cucumber slices were used to create a picture of a human face. 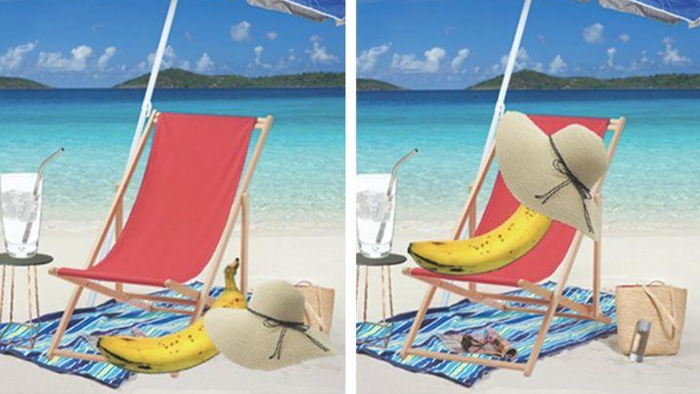 Study participants saw depictions of both fresh and slightly-past-its-prime produce in both anthropomorphized and unadorned states. Produce staged to show human qualities were rated more desirable than the same produce without the anthropomorphic effects.
University of Houston

Pity the poor blemished banana. In a society that equates beauty with quality, the perception that blemished produce is less desirable than its perfect peers contributes to 1.3 billion tons of wasted food a year globally. That, in turn, raises the cost and environmental impact of feeding the world's population.

Researchers are suggesting a potential solution - they found that 'humanizing' produce can change consumer attitudes toward fresh fruits and vegetables that are showing signs of age. The work, published in the Journal of the Association for Consumer Research, found that depicting imperfect-looking but still nutritious produce with human characteristics enhanced the food's appeal.

"We suggest that when old produce is humanized, it is evaluated more favorably, since it leads consumers to evaluate the old produce with a more compassionate lens," the researchers wrote.

Vanessa Patrick, Bauer Professor of Marketing at the University of Houston and a co-author on the paper, said the researchers examined how attitudes toward human aging - "old is gold," vs. "young is good" - translated to attitudes toward so-called "mature" produce. The project involved anthropomorphizing bananas, cucumbers and zucchini, or depicting the produce in ways that suggest human-like traits.

Bananas, for example, were depicted sunbathing while reclining in a chaise. Cucumber slices were used to create a picture of a human face.

"With fresh produce, aging promotes visible changes, much as it does in humans," Patrick said. "That can create a connection with human qualities of aging when the food is anthropomorphized."

Anthropomorphism didn't affect perceptions of fresh produce. The researchers said the results suggest grocery store managers and other marketers should consider using similar strategies to promote produce that has begun to show signs of aging but remains nutritious and tasty.

"Making food that would otherwise go to waste more appealing to consumers may allow store managers to avoid having to reduce the price for that older produce, which would improve the bottom line," Patrick said.