Envoys prepared to meet in Shanghai next week for talks aimed at ending a tariff war. 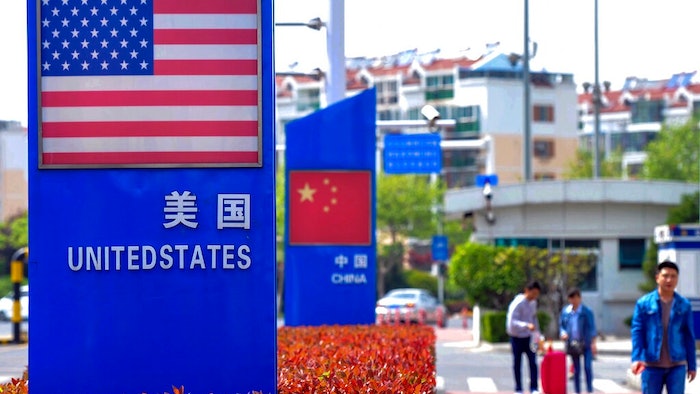 In this May 8, 2019, photo, people walk by a display boards featuring the U.S. and Chinese flags in a special trade zone in Qingdao in eastern China's Shandong province. A government spokesman says Chinese companies have expressed willingness to import U.S. farm goods as envoys prepare to meet next week for talks aimed at ending a tariff war.
Chinatopix via AP

BEIJING (AP) — Chinese companies are willing to import more U.S. farm goods, the Ministry of Commerce said Thursday, as envoys prepared to meet in Shanghai next week for talks aimed at ending a tariff war.

The announcement appeared to be aimed at defusing President Donald Trump's criticism that Beijing was backsliding on a promise to narrow its trade surplus with the United States by purchasing more American farm products.

A ministry spokesman, Gao Feng, confirmed that trade envoys Tuesday will hold their first face-to-face talks on Tuesday since Trump and President Xi Jinping agreed in June to resume negotiations on the conflict that has battered exporters and rattled financial markets.

Gao said Chinese importers will negotiate with U.S. suppliers of farm goods, though he said there was "no direct relationship" with next week's talks.

"Chinese companies have the willingness to continue importing some agricultural products from the United States," Gao said at a news conference. "They have already inquired and will negotiate contracts with US suppliers."

Beijing blocked imports of U.S. soybeans and raised tariffs on other farm products in response to Trump's duty increases on Chinese goods in response to complaints about China's technology development plans.

China agreed last year to buy more American agricultural goods, natural gas and other exports but scrapped that after one of Trump's tariff hikes.

The Chinese government said in June that any purchases must be at a reasonable level, suggesting Beijing was becoming more cautious about making commitments before it sees what Washington offers in exchange. Trump recently accused Beijing of backsliding, saying on Twitter that "China is letting us down."

Trump imposed curbs last month on exports of U.S. components and technology to Huawei Technologies Ltd., China's first global tech brand. The company has warned its sales of smartphones and network equipment will be badly hurt.