It sent flames shooting into the night sky that could be seen for miles and generated so much heat that firetruck lights melted. 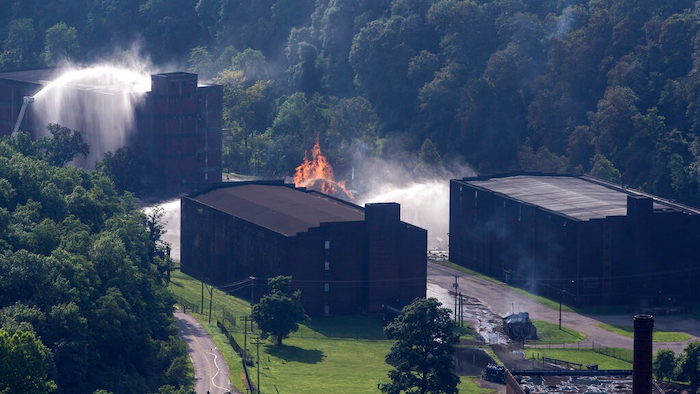 LOUISVILLE, Ky. (AP) — A Jim Beam storage warehouse that burned down, destroying 45,000 barrels of aging whiskey, was equipped with sprinklers and was insured, the company says.

Meanwhile, the famed distiller is still assessing the loss of the bourbon.

Remnants of the fire that erupted late Tuesday at the central Kentucky warehouse continued to burn Friday. Officials want to let as much alcohol as possible burn to reduce the flow of bourbon-filled runoff into nearby waterways.

"The fire now is very small," Woodford County Emergency Management Director Drew Chandler said in a telephone interview Friday. "You have to be practically standing next to the pile of debris to see any flame."

An unknown amount of bourbon has entered the water and has been visible on the Kentucky River. Fish kills were reported due to the runoff, state environmental officials said. The spirits company said aerators were deployed to help "oxygenate the water" in an effort to keep more fish alive.

Beam Suntory has brought in environmental cleanup contractors and consultants, Chandler said. The destroyed warehouse was about 100 yards (91 meters) from Glenns Creek, a tributary of the Kentucky River.

"The longer that distillate is allowed to burn off, the less of it there is when they do put the fire out, minimizing the contaminated runoff going into the creek and flowing into the river," he said.

No one was injured in the blaze that broke out in the massive warehouse near the Woodford-Franklin County line. It sent flames shooting into the night sky that could be seen for miles and generated so much heat that firetruck lights melted.

Fire investigators haven't yet determined a cause. Jim Beam officials on Wednesday said initial reports suggested the fire resulted from a lightning strike.

Beam's warehouses are equipped with sprinklers, the distiller said Friday. With so much wood and alcohol in the buildings, fire spreads rapidly.

Sprinklers activated in the warehouse that burned, it said.

The destroyed whiskey amounted to about 1% of Beam's overall aging bourbon inventory, it said.

One standard bourbon barrel usually holds about 53 gallons (201 liters) of bourbon. If all of the barrels held bourbon, that would be a loss of at least 6.75 million bottles, the Courier Journal reported.

Beam Suntory officials haven't given a dollar amount on the loss but said the warehouse and its contents were insured.

The lost whiskey was years from being bottled as a Jim Beam product that ages for four years. Jim Beam is the world's best-selling bourbon.

"We expect no disruptions to supply as a result of this loss," Beam Suntory spokeswoman Emily Bryson York said. "We continue to build additional warehouses in Kentucky as part of ongoing capacity expansion plans."

The company has said it operates 126 barrel warehouses in Kentucky that hold about 3.3 million barrels for its brands.

Kentucky distillers produce 95% of the world's bourbon, according to the Kentucky Distillers' Association. The state's bourbon sector is in the midst of a $2.3 billion-plus building boom among KDA members — signaling distillers' confidence that growing demand for their spirits will continue. Projects include new and expanded production facilities, more warehousing and bottling lines and new and expanded tourism centers.