Outbreaks related to sprout seeds resulted in more than 2,600 cases of illness.

The U.S. Food and Drug Administration today released a proposed draft guidance, Reducing Microbial Food Safety Hazards in the Production of Seed for Sprouting, which is intended to make the sprout seed industry (seed growers, suppliers, and distributors) aware of the agency’s serious concerns with the continuing outbreaks of foodborne illness associated with the consumption of raw and lightly-cooked sprouts.

"Studies indicate that contaminated seed is the likely source of most sprout-related outbreaks, as this commodity is inherently more susceptible to these issues because they are grown in warm and humid conditions that are favorable for bacteria like Salmonella, Listeria and E. coli,” said FDA Deputy Commissioner for Food Policy and Response Frank Yiannas.

The FDA’s draft guidance provides the agency’s recommendations to firms throughout the production chain of seed for sprouting. It states that if a grower, holder, conditioner, or distributor reasonably believes that its seeds are expected to be used for sprouting, that steps are taken to prevent those seeds from becoming contaminated.

During the 60-day comment period for this draft guidance, stakeholders will be able to provide comments on the draft provisions. 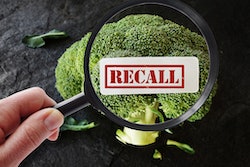