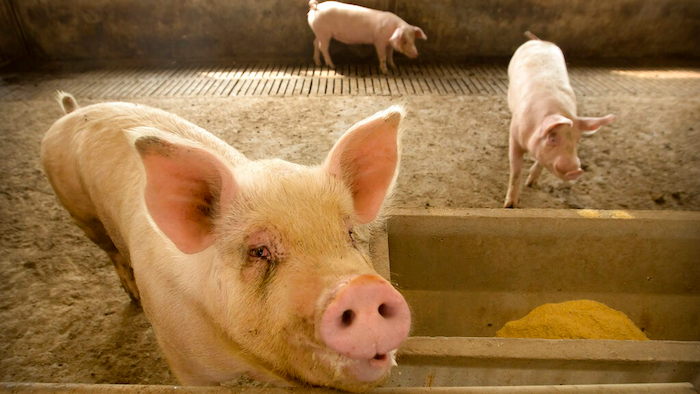 In this May 8, 2019, photo, pigs stand in a barn at a pig farm in Jiangjiaqiao village in northern China's Hebei province. Pork lovers worldwide are wincing at prices that have jumped by up to 40 percent as China's struggle to stamp out African swine fever in its vast pig herds sends shockwaves through global meat markets.
AP Photo/Mark Schiefelbein

BEIJING (AP) — Hong Kong retiree Lee Wai-man loves pork fresh from the market but eats a lot less now that the price has jumped as China struggles with a deadly swine disease that has sent shockwaves through global meat markets.

China produces and consumes two-thirds of the world's pork, but output is plunging as Beijing destroys herds and blocks shipments to stop African swine fever. Importers are filling the gap by buying pork as far away as Europe, boosting prices by up to 40% and causing shortages in other markets.

"I'm a fresh-pork lover, but it's too expensive," Lee, 87, said as she shopped at a Hong Kong market.

African swine fever doesn't harm humans but is fatal and spreads quickly among pigs. It was first reported in August in China's northeast. Since then, 1 million pigs have died and the disease has spread to 31 of China's 34 provinces, according to the U.N. Food and Agriculture Organization.

The outbreak's scale is unprecedented, said Dirk Pfeiffer, a veterinary epidemiologist at the City University of Hong Kong.

"This is probably the most complex animal disease we have ever had to deal with," Pfeiffer said.

China's shortfall is likely to be so severe it will match Europe's annual pork output and exceed U.S. production by 30%, industry researchers say.

"Everyone wants to import as much pork as possible," said industry analyst Angela Zhang of IQC Insights. She said the trend is likely to accelerate as Chinese production falls.

That's a boost for farmers in Germany, Spain and other countries with healthy pigs but hard on families in Southeast Asia and other poor markets that rely on pork for protein.

This year's Chinese pork output might fall by up to 35%, according to Rabobank, a Dutch bank.

Global supplies will be "redirected to China," the bank's researchers said in an April report. It said the "unprecedented shift" in trade will likely cause shortages in other markets.

Grocery shoppers in Germany, Japan and other high-income markets grumble at paying more for kielbasa or tonkatsu, but short supplies are a serious concern in places such as Cambodia where pork is the only meat many families can afford.

Cambodia's live hog price jumped 37% in the past six months, according to Srun Pov, president of the Cambodia Livestock Raiser Association. He said the country is buying about 30% of its daily needs of 500-600 tons from Thailand.

"Pork is important to us," said Chhe Pich as a butcher weighed her purchase in the Cambodian capital, Phnom Penh. "Even though the current price is a bit high, I have to buy it to serve my family."

The U.S. Department of Agriculture expects China's pork imports to soar 41% this year over 2018 to 2.2 million tons. There's no immediate end in sight as "evidence mounts that China will be unable to eradicate ASF in the near-term," it said in a recent report.

The jolt to the global meat industry highlights China's voracious demand for food for its 1.4 billion people, the potential for wider disruptions if its own production falters and its growing ability to outbid other customers for supplies.

African swine fever was first reported in August in China's northeast. Since then, 1 million pigs have died and the disease has spread to 31 of China's 34 provinces, according to the FAO.

Outbreaks have been reported in Cambodia, Mongolia, South Africa and Vietnam.

It's been found among a small number of wild boars, which can spread the disease, in Russia and seven European countries.

Yang Wenguo, a farmer in Jiangjiaqiao, a village a two-hour drive northeast of Beijing, said he has lost 800 pigs. He now has a few dozen.

Yang dosed his animals with government-subsidized medications but they kept getting sick. The government hauls away dead animals and pays compensation of 1,000 yuan ($145) for a sow and 20 yuan ($3) for a piglet.

"You buy pigs, then they all die," he said, walking on ground covered in disinfectant that looks like dirty snow. Only about 60 to 70 pigs remain from total herds of about 3,000 in Jiangjiaqiao.

Four other families in the village that raised pigs have stopped, Yang said, "No one can bear losing all the pigs they raise." He'd like to sell his farm and find work in the city but no one wants to buy.

The USDA forecasts China's total hog herd will shrink by 18% this year to 350 million animals, the lowest level since the 1980s.

In Hong Kong, authorities destroyed 6,000 pigs at one slaughterhouse after an animal imported from the mainland was found to be infected.

"More and more customers are switching from roast pork to other roast meat like chicken and duck," said restaurant owner Siu Si-man.

Chinese authorities respond to outbreaks by temporarily banning shipments of pigs from any province where a case is reported.

That has caused retail prices to spike in big cities cut off from supplies. Prices paid to farmers have collapsed in areas with a surplus of pigs they can't export.

A half-hour drive from Yang's farm, Wang Lijun breeds his own piglets to avoid buying infected animals. His herd shrank from 160 to 170 animals to about 20 to 30 but none died this year.

"All farmers are cutting production," he said, walking past a row of cages holding pregnant sows.

The number of sows needed for breeding had fallen 19% from a year ago by the end of February, which suggests supply will plunge through next year, the USDA forecasts.

"China's herd-rebuilding will be slow and take years," said Rabobank.

In Vietnam, the government said in mid-May that 1.2 million pigs, or about 5% of its total herds, had died or been destroyed. Rabobank expects Vietnamese pork production to fall 10% this year from 2018.

China's biggest foreign pork supplier is Spain, which accounts for 20% of imports. Germany supplies 19.5% and Canada 16%.

Spanish exports of pork and other pig products to China jumped 32.8% in the first two months of 2019 from a year earlier to 117 million euros ($131 million), according to Interporc, a Spanish industry group.

"My suppliers have told me that they are going to raise prices at the end of the month because of what is happening in China," said Jordi Nargares, a butcher in a working class neighborhood of Barcelona.

U.S. pork sales to China have been disrupted by Beijing's tariff war with the Trump administration over trade and technology.

Chinese buyers canceled orders for 3,300 tons of American pork the week of May 6, according to the USDA.