Revenue was expected to fall as McDonald's puts some company-owned stores back in the hands of franchisees. 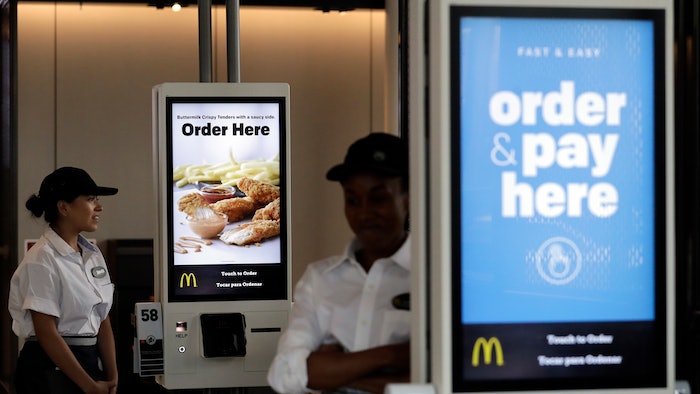 CHICAGO (AP) — McDonald's turned to a sure thing in the first quarter, bacon, and it paid off. The world's biggest burger chain reported a first quarter profit of $1.33 billion, or $1.72 per share. That was the same profit it reported in the January-March period a year ago.

The latest quarter included six cents per share of additional income tax costs related to the 2017 tax law, while the weakening of the euro and other currencies hurt earnings per share by nine cents. McDonald's revenue fell 3.5 percent to $4.95 billion but topped Wall Street's expectations. Revenue was expected to fall as McDonald's puts some company-owned stores back in the hands of franchisees. Around 90 percent of the company's stores globally are run by franchisees; McDonald's wants to bring that to 95 percent.

At the beginning of the year, McDonald's Corp. offered bacon on anything customers wanted for an hour. That — along with new menu items like doughnut sticks — generated both hype and store traffic.

U.S. same-store sales — or sales at locations open at least a year — were up 4.5 percent, beating expectations. The company said it's also seeing gains as U.S. stores come back into service after renovations. McDonald's is modernizing its restaurants with digital ordering kiosks, table service and curbside pickup for mobile orders. This year, 2,000 U.S. restaurants will be renovated.

Global sales at restaurants open at least a year jumped 5.4 percent in the January to March period. That was better than Wall Street's forecast of 3.4 percent, according to analysts polled by FactSet. "The broad-based strength across all markets suggests that the investments the company is making behind value, technology, and service are working," Bernstein analyst Sara Senatore wrote in a note to investors.

During the quarter, the Chicago company bought Dynamic Yield, an Israeli artificial intelligence startup. It plans to use the company's technology to personalize customer ordering. For example, it will be able to vary drive-thru menu suggestions based on the weather or the time of day. The technology will also be used in the McDonald's app and at in-store kiosks.

The acquisition didn't close until April, so there was no impact to first quarter earnings. McDonald's shares edged up less than one percent to $198.63 in morning trading.

Elements of this story were generated by Automated Insights (http://automatedinsights.com/ap) using data from Zacks Investment Research. Access a Zacks stock report on MCD at https://www.zacks.com/ap/MCD

McDonald's to Pay $1.3B in Tax Fraud Case