Taxes on soda have taken effect in several cities, but lobbying from the beverage industry has been credited with helping to block statewide proposals. 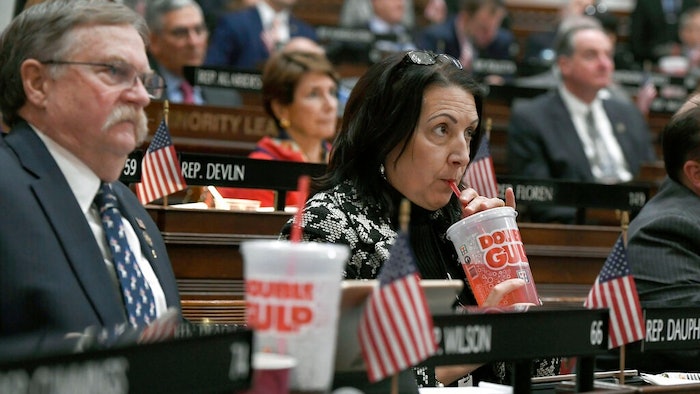 In this Feb. 20, 2019 file photo, state Rep. Anne Dauphinais R-Killingly, takes a sip from a big gulp soda as Connecticut Democrat Gov. Ned Lamont delivers his budget address at the State Capitol in Hartford, Conn. Lamont proposed a tax on sugary drinks in his first budget. Connecticut is among several states likely to see debate this year over taxes that advocates endorse as way to reduce consumption of liquid calories. On March 25 the American Academy of Pediatrics and the American Heart Association called for education campaigns and raising prices through taxes to reduce consumption of sugary drinks by young people.
AP Photo/Jessica Hill, File

HARTFORD, Conn. (AP) — Nearly three decades after a U.S. state last imposed a special tax on sugary drinks, Connecticut's governor is pushing for one to help close a budget deficit — and bracing for a fight.

Taxes on soda and other sugar-loaded drinks have taken effect in recent years in several cities around the country, but lobbying from the beverage industry and its allies has been credited with helping to block statewide proposals that emerge annually in state legislatures around the country.

"The industry lobbying is going to be pretty ferocious. I don't know if the legislature can stand up to it," said Connecticut Gov. Ned Lamont, a Democrat, who included 1.5-cent-per-ounce tax on sugar-sweetened drinks in his budget proposal.

Connecticut is among several states likely to see debate renewed this year over taxes that advocates endorse as a way to reduce consumption of liquid calories blamed for contributing to health problems such as obesity and diabetes. Opponents argue the taxes hurt stores and supermarkets as well as beverage producers, while inflicting financial harm on consumers.

"The challenge for these taxes, whether it's a state or a city, but typically a state, is they're very unpopular with working families and small, local businesses," said William Dermody Jr., vice president of media and public affairs for the American Beverage Association. "These people are vocal to their representatives that they dislike this tax."

Statewide taxes on sugary drinks were proposed this year in states including New York, Massachusetts, Rhode Island, Vermont and California, but the last state to impose any such tax was Arkansas, which adopted an excise tax on soft drinks in 1992. Three other states have had sugary drink taxes on their books for decades — Tennessee, Virginia, and West Virginia, according to the National Conference of State Legislatures. Dozens of other states apply sales tax on at least some soda purchases.

Revenue from the taxes is used for purposes ranging from a medical school in West Virginia to litter and recycling programs in Virginia and Tennessee. Revenue from Connecticut's proposed tax would go to the state's main spending account but Lamont said he hopes the tax also will ultimately reduce health care costs.

Last week, the American Academy of Pediatrics and the American Heart Association called for education campaigns and raising prices through taxes to reduce consumption of sugary drinks by young people.

Advocates on either side have cited studies with different conclusions on the effectiveness of taxes for public health. A 2017 report from Healthy Food America said sugary drink sales in Mexico dropped 9 percent two years after that country imposed a tax, while they dropped 10 percent one year after Berkeley, California, adopted such a tax. But the American Beverage Association says other research, including a 2017 study of Philadelphia's soda tax commissioned by the industry and conducted by Oxford Economics, challenges that argument. It notes consumers shifted grocery buying trips outside the city to avoid the tax, or purchased untaxed substitute items, such as drink mixes.

In Connecticut, which is facing a two-year budget deficit of about $3.7 billion, Lamont's office estimated the tax on sugary drinks would generate $163 million in new annual revenue.

One Connecticut soda company that dates back to 1904, Avery's Beverages in New Britain, has printed its opposition to Lamont's proposal on its labels. The company has produced a limited edition "Don't Tax Me Ned!" soda brand, which has been selling fast. General Manager Rob Metz said many of his customers buy cases of soda, choosing from more than 50 flavors ranging from sarsaparilla to kiwi. He says this tax will increase the retail price of a case from $16 to more than $21, and he's fearful it will also apply to his wholesale customers, increasing the pallet price by $250.

There's no special flavor for the "Don't' Tax Me Ned" sodas.

"If we did create a special flavor it would be so bitter you couldn't drink it," he said with a laugh.

Cities have had more success passing taxes. Municipal taxes on sugary drinks were implemented in four California cities, including San Francisco and Berkeley, as well as Philadelphia, Seattle, Boulder, and the Navajo Nation, according to Healthy Food America. The most recent are San Francisco and Seattle, which took effect in January 2018. A penny-per-ounce tax in Cook County, Illinois, was repealed in 2017 following lawsuits, a warning that millions in federal food stamp benefits could be lost and complaints by store owners about plummeting sales.

The beverage industry has tried to slow the expansion of local soda taxes by supporting efforts at the state level to ban local taxes. Arizona, Michigan, California and Washington each passed legislation or referendums that banned local taxes on drinks. In Washington, the Yes to Affordable Groceries campaign, funded almost entirely by the soda industry, raised more than $20 million to pass a measure last year prohibiting new local taxes on soda or groceries.

In California, a group of lawmakers recently unveiled a "re-think your drink" campaign. Besides a tax on sugary drinks, the legislative package calls for barring restaurants from selling soda in cups larger than 16 ounces (.5 liters) and banning soda discount coupons.

"The goal of our bill is to make people think twice about their choices," said Assemblyman David Chiu of San Francisco, a Democrat, and "to hopefully steer them toward healthier choices."