Import tariffs, volatile exchange rates and a potentially wounded British economy are setting off alarms among farmers, workers and officials. 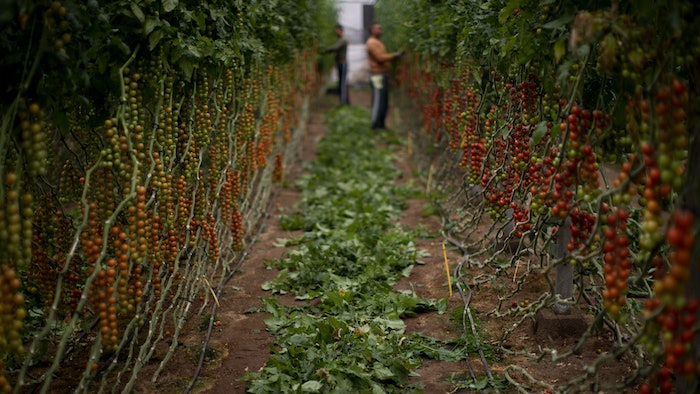 Workers remove the dry leaves before collecting the tomatoes inside a greenhouse.
AP Photo/Emilio Morenatti

ALMERIA, Spain (AP) — Spain's southeastern Almeria province used to be so parched and barren that Italian movie director Sergio Leone chose it in the 1960s as the shooting location for his spaghetti westerns starring Clint Eastwood.

Nowadays, thanks to extensive irrigation and vast greenhouses, a corner of Spain with a hot desert climate prospers, growing fruit and vegetables that mostly goes to northern European countries where cold, gray weather limits the range of locally grown produce much of the year.

Britain's impending departure from the European Union could punch a multi-million-euro hole in that business, however. The trade in fresh produce hinges on getting goods to market promptly. By throwing up borders with the 27 countries remaining in the EU, Brexit could mean long, costly waits for trucks at customs posts. The prospect of U.K. import tariffs, volatile exchange rates and a potentially wounded British economy also is setting off alarms among farmers, workers and officials on the Mediterranean coast.

"The fruit and vegetable produce for the U.K. market is of top quality, so the prices paid by the supermarkets there are very attractive for us," farmer Andres Gongora said, standing amid row upon row of tomato plants in the humid air of one of his Almeria greenhouses.

Gongora sells most of his produce to a leading British supermarket chain, Tesco. Other Spanish growers ship their crops to other top grocery retailers, such as Sainsbury's or the Marks & Spencer food stores. Tomatoes, zucchini, watermelons, cucumbers and lettuce flourish here while northern Europe shivers in the winter.

Almeria delivered almost 314,000 tons of farm produce last year to England, Scotland and Northern Ireland, making the U.K. the province's third-largest market after Germany and France, according to Spain's General Directorate for Customs. The sales brought just over $310 million in revenue.

Britain's divorce from the European Union bloc will be bad enough, locals say, as the U.K. adopts import procedures and tariffs applicable to a non-EU country. But if the U.K. leaves as planned on March 29 without a deal on future trade, potentially sending the British economy into a tailspin, it could have catastrophic spillover effects for Almeria's growers.

"If the British economy goes through a tough period, in terms of the people, their wages ... we're wondering what their purchasing power will be like," says Gongora, who represents fruit and vegetable growers in a national association of farmers and ranchers. Alicia Sanchez, a Ministry of Commerce official dealing with foreign trade, says the immediate hurdle will be border delays due to new formalities. For Spanish growers, the nightmare scenario is fruit rotting on trucks while drivers wait to have their paperwork stamped and permission to enter the U.K.

The Almeria landscape leaves no doubt about what makes the economy tick in this sunny corner of the Andalusia region. Hundreds of giant, closely packed white greenhouses blanket the flat landscape, stretching to the horizon. Locals refer to it as the "sea of plastic" because the greenhouses are covered in plastic, which intensifies and traps heat while maintaining humidity.

The sheathing allows farmers to harvest fruit and vegetables one month earlier than they would be able to if they were growing in open fields. It also means farmers can double or even triple the number of times per year they have crops ready to pick.

At the Monte Rosa farm in Almeria, workers wearing tight-fitting gloves move along rows of bushy, vertical plants, snipping off ripe tomatoes. Some are as big as a fist, others the size of golf balls. The tomatoes are packed into shallow boxes that are stacked above head height and then placed inside trucks for the two- or three-day journey north to the U.K. where shoppers are willing to pay more to have out-of-season produce on their tables.

"At the moment, to export to the U.K. is completely easy," Frances Llonch, director-general of the international fruit and vegetable group that owns Monte Rosa, said. Even with Britain's withdrawal from the EU's common market and other rights and responsibilities of being in the bloc, no one knows if trade will be a little or a lot harder, the same or easier post-Brexit.

The absence of a precedent, compounded by the uncertainty over a deal that would outline the future relationship between the EU and its ex-member, has put a question mark over many industries on both sides of the breakup. For Spanish fruit and vegetable growers, concerns about the future are stacking up: expected import tariffs will make their produce more expensive for British shoppers, while the British government is likely to support domestic farmers against rival EU producers.

To make up for lost exports to the U.K., Spanish businesses will have to compete for customers in other EU countries, which could create a produce glut and drive down prices. "It will be hard ... to find new clients or new countries. It's almost impossible," Llonch said, adding that farmers who sell almost all their produce to the U.K. "are terrified."