Investigators are trying to figure out how E. coli contaminated a California water reservoir.

NEW YORK (AP) — U.S. food regulators say they weren't able to identify a contamination source for a food poisoning outbreak that prompted them to warn people to avoid romaine lettuce this fall .

The Food and Drug Administration says it wasn't able to determine how a water reservoir on a Santa Barbara County, California, farm became contaminated with E. coli. It also says the water reservoir doesn't explain how lettuce from other farms may have been contaminated.

The FDA says leafy greens' short shelf-life makes it difficult to investigate such outbreaks. It notes food safety has been a longstanding issue with leafy greens, and that the industry should review operations to minimize risk. The Centers for Disease Control and Prevention says there is always risk of foodborne illness when eating raw produce. 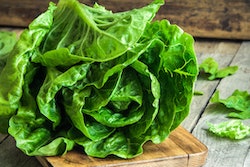