As 2018 drew to an end, distillers felt the pain from global trade disputes. 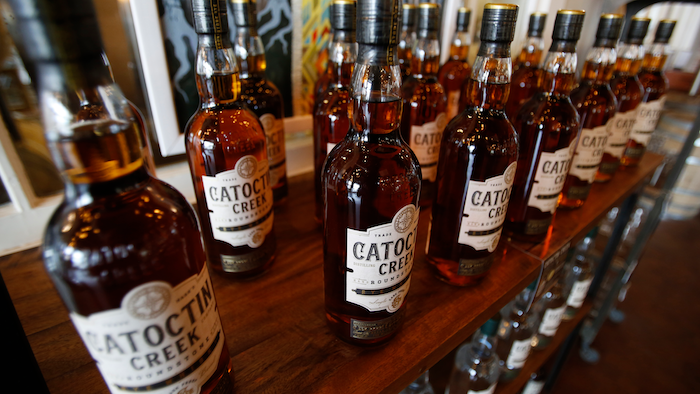 Exports to some key overseas markets gyrated wildly last year for producers of bourbon, Tennessee whiskey and rye whiskey. Overall, U.S. spirits exports in 2018 stayed on another record-setting trajectory, due in part to surging whiskey sales in the months leading up to the tariffs as larger distillers stockpiled supplies, the Distilled Spirits Council said. Other categories including vodka, brandy and rum also had strong overseas sales.

But exports would have been much higher without the trade war, it said.

"For the first time, data can demonstrate the negative impact of retaliatory tariffs on what had been a booming export growth story," said Christine LoCascio, the council's senior vice president for international affairs. "The tariffs are making it more difficult to be competitive in key markets," she added.

The export figures confirmed fears among industry leaders that tariffs would depress overseas sales. But whiskey industry officials have been muted in blaming President Donald Trump and others for the export headaches. American whiskey exports to the European Union — the industry's biggest export market — fell by 8.7 percent from July through November of last year, compared to the same period in 2017, the group said in its annual report released in New York.

In the first half of 2018, American whiskey exports to the EU surged by 33 percent, it said. Overall global American whiskey exports grew by 28 percent in the first half of 2018, then fell by 8.2 percent from July to November — compared to a year ago — once tariffs took effect, according to the trade group's export figures, based on numbers supplied by the U.S. government.

"That suggests that the tariffs are starting to have a measureable impact on American whiskey exports," LoCascio said. Despite the volatility, exports for all U.S. spirits recorded another record at almost $1.7 billion through November, the council said.

"It would have been a lot stronger if we hadn't had these tariffs" said council spokesman Frank Coleman. "If not for the tariffs, we would have been popping the corks on the best bottles in our liquor cabinet." American whiskey makers face retaliatory tariffs in Canada, Mexico, China and Turkey as well as the EU. Those duties amount to a tax, which producers can either pass along to customers through higher prices or absorb shrinking profits.

Catoctin Creek Distillery in Virginia has a couple hundred cases of its rye whiskey sitting in a European warehouse. The inventory was built up in anticipation of growing European sales in 2018. But since the tariffs took effect, Catoctin Creek's sales in Italy and Germany have plunged and its plans of expanding to the United Kingdom are on hold, said its co-founder and general manager, Scott Harris.

About 11 percent of its overall 2017 revenues came from Europe. The distillery hoped its European business would increase to one-fourth of total revenues in 2018, but "that part just never materialized," Harris said in an interview. "If we were able to get the tariffs removed, I think we'd be in good shape to really just take off," he said.

For now, Catoctin Creek is absorbing the costs of tariffs for the scaled-back European sales it's able to make in hopes of maintaining relationships with distributors and staying competitive, Harris said. "For European sales, it means we're losing money on every bottle," he said.

Asked how long his distillery can afford to do that, he replied: "I don't even want to think about it. We might do it for another half of year and see. Honestly, it's hard to be optimistic at this point."

While exports were a glaring concern, domestic sales of distilled spirits were strong in 2018.

The council reported another year of record spirits sales and volumes in the U.S., resulting in continued market share growth. Supplier sales were up over 5.1 percent, rising $1.3 billion to a total of $27.5 billion, while volumes rose 2.2 percent to 231 million cases, it said.