He blamed the President for starting a trade war that has raised prices for U.S. consumers and cut market access for U.S. farmers.

Schultz said Trump's presidency is "one of the most significant security threats America faces in the post-World War II era." He blamed Trump for walking away from strategic alliances, starting a trade war that has raised prices for U.S. consumers and cut market access for U.S. farmers, and turning a blind eye to Russian interference in U.S. democracy.

"He has unilaterally abdicated our historical role as a global leader," Schultz said. "He has poisoned our culture and our values, giving hate and hate speech and racism and bigotry license." Prominent Democrats have urged the Seattle billionaire not to run as an independent, saying it could split opposition to Trump and make his re-election more likely. Schultz vowed that he would not do anything to help Trump retain the White House.

Although his speech was short on concrete proposals, Schultz also addressed what he views as other significant issues facing the country, beginning with partisan gerrymandering that helps the Democratic and Republican lawmakers remain safely in power and promotes the views of each party's extremes, he said.

He called for immigration reform, saying the country needs both to protect its borders and to treat people with dignity. He suggested that immigrants in the U.S. illegally should have a path to legal status and that "Dreamers," those brought to the U.S. illegally as children, should be able to obtain citizenship.

He called for tax reform, including tax cuts for the middle class and small businesses and higher taxes for wealthy people like himself. He offered no specifics but has previously branded a call by Democratic Sen. Elizabeth Warren of Massachusetts for a tax on extreme wealth "ridiculous."

He said the government must eliminate the national debt; suggested health care costs could be controlled by increasing choice and competition, requiring more price transparency and investing in preventive care; and endorsed requiring universal background checks to buy guns and banning gun possession by criminals and those suffering from mental illness. 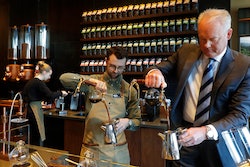