The demonstration focused on climate-friendly agriculture, healthy food and valuing the work of farmers. 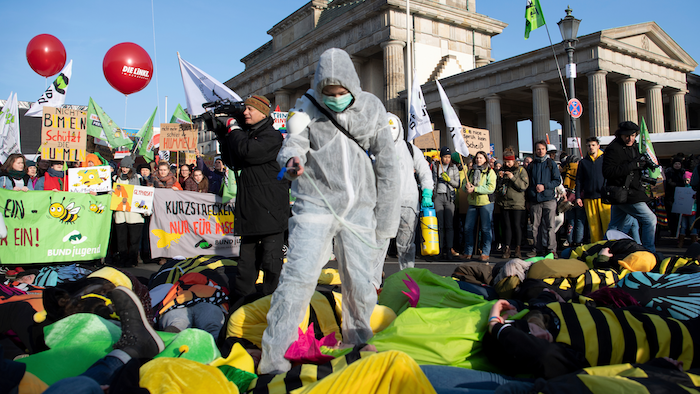 Demonstrators protest for more animal welfare and protection in agriculture on occasion of the "Green Week" fair in front of the Brandenburg Gate in Berlin.
Ralf Hirschberger/dpa via AP

BERLIN (AP) — Thousands of farmers from across Germany and their supporters have protested at Berlin's landmark Brandenburg Gate, calling for climate-friendly agriculture and healthy food. Organizers say 170 tractors drove in from farms around the country to join 35,000 other protesters for the Saturday demonstration under the motto "we are fed up with the agricultural industry."

The protest was called to coincide with the German capital's "Green Week" agricultural fair, and Agriculture Minister Julia Kloeckner's meetings with dozens of countries about more international cooperation on agricultural issues, the dpa news agency reported.

The protesters say the message to Kloeckner and the others is that "farm work on the land, in the fields and in the stables is something very valuable and worthy of protection."