The Mexican Jalapeño Peanut flavor "combines just the right amount of spice with chocolate." The Thai Coconut Peanut flavor is a "savory sweet taste inspired by the tropics of Thailand." And there's nothing more English than toffee, and the English Toffee Peanut flavor "tastes as elegant as a trip to Great Britain itself."

According to Allison Miazga-Bedrick, Brand Director, M&M'S: "We believe flavors have the power to transport you, and this time, we are making that journey a reality by offering participating fans the chance to win a trip around the world." By voting in this year's Flavor Vote, fans will be entered for the chance to win a trip to all three countries that inspired the new flavors: Mexico, Thailand and England.

The flavor with the most votes will be announced in August 2019 and continue to be sold at stores nationwide. 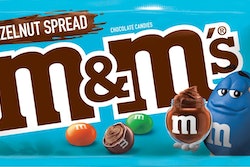