Burger King said its tweet was all in good fun, but some marketing experts think the move was unwise.

DETROIT (AP) — Burger King is needling President Donald Trump for his tweet about ordering more than 1,000 "hamberders" for the Clemson University Tigers' visit to the White House after winning the college football championship.

The spelling error was quickly corrected. But Burger King jumped in with a tweet of its own: "Due to a large order placed yesterday, we're all out of hamberders. Just serving hamburgers today."

Burger King said its tweet was all in good fun, but some marketing experts think the move was unwise.

Laura Ries, an Atlanta-based marketing consultant, said she understands companies wanting to be part of the social media conversation. But they should keep the message positive, not mocking. "It's totally the wrong tone. It's not funny. It's mean," she said. "No matter what you think of the president, it's still the president."

Burger King responded that it "has a pulse on pop culture," and wants to be part of trending topics. It also said it was proud that its burgers were served to the football team.

"We like to playfully joke around with what the internet and news outlets are saying, but never to be mean spirited," the company said in a statement.

Burger King isn't the only company to troll Trump on Twitter. Last week, Columbia Sportswear Co. tweeted a message from its CEO: "Make America's parks open again." And in 2017, Smirnoff vodka had billboards that read: "Made in America. But we'd be happy to talk about our ties to Russia under oath."

Companies that veer into politics take a risk of alienating customers or even Trump himself. Burger King might not be served at the next White House feast, Ries said.

Some Twitter followers criticized Burger King. But others liked the tweet so much they celebrated with lunch at Burger King on Tuesday.

Robert Passikoff, a marketing consultant and founder of Brand Keys Inc., suspects the tweet will have no lasting impact. Sometimes, he said, it's critical for a brand to use Twitter to engage with customers and change attitudes, like when it's trying to recover from a food poisoning scare. Burger King's tweet doesn't have that kind of weight, he said. 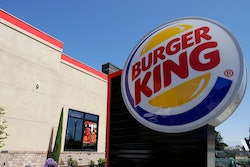