Is It Time to Engineer a Spicy Tomato?

With the latest gene-editing techniques, it could be possible. 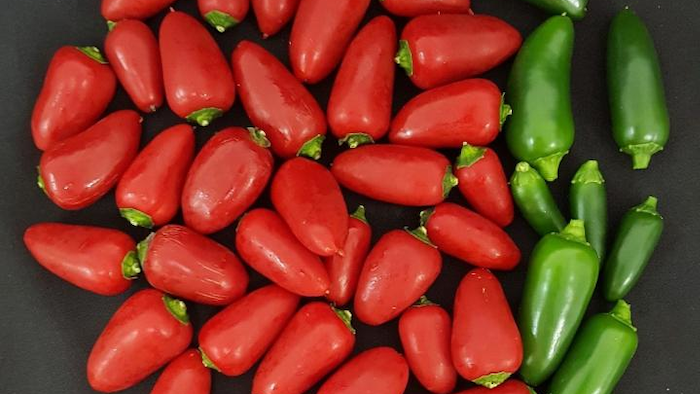 The chili pepper, from an evolutionary perspective, is the tomato's long-lost spitfire cousin. They split off from a common ancestor 19 million years ago but still share some of the same DNA.

While the tomato plant went on to have a fleshy, nutrient-rich fruit yielding bountiful harvests, the more agriculturally difficult chili plant went defensive, developing capsaicinoids, the molecules that give peppers their spiciness, to ward off predators.

With the latest gene-editing techniques, it could be possible, although challenging, to make a tomato produce capsaicinoids as well, researchers argue in an opinion article publishing January 7 in the journal Trends in Plant Science.

Their objective isn't to start a hot, new culinary fad--although that's not completely off the table--but to have an easier means of mass producing large quantities of capsaicinoids for commercial purposes. The molecules have nutritional and antibiotic properties and are used in painkillers and pepper spray.

"Engineering the capsaicinoid genetic pathway to the tomato would make it easier and cheaper to produce this compound, which has very interesting applications," says senior author Agustin Zsögön (@shogur), a plant biologist at the Federal University of Viçosa in Brazil whose group is working toward this goal. "We have the tools powerful enough to engineer the genome of any species; the challenge is to know which gene to engineer and where."

The spicy taste that capsaicinoids add isn't a taste, but a reaction to pain. They activate nerve cells in the tongue that deal with heat-induced pain, which the brain interprets as a burning sensation. Evidence suggests that the evolution of capsaicinoids helped chili peppers deter small mammals from eating their fruit. Birds, which are much better seed dispersers, show no pain response to the molecules.

There are at least 23 different types of capsaicinoids, which originate from the pith of the chili pepper. The spiciness of a pepper is determined by the genes that regulate capsaicinoid production, and less pungent peppers have mutations affecting this process. Previous gene sequencing work has shown that tomatoes have the genes necessary for capsaicinoids but don't have the machinery to turn them on.

"In theory you could use these genes to produce capsaicinoids in the tomato," says Zsögön. "Since we don't have solid data about the expression patterns of the capsaicinoid pathway in the tomato fruit, we have to try alternative approaches. One is to activate candidate genes one at a time and see what happens, which compounds are produced. We are trying this and a few other things."

The sequencing of the chili pepper genome and the discovery that the tomato has the genes necessary for pungency paves the way for engineering a spicy tomato.