Due in part to automation and the changing labor market, the company has about one-tenth of the employees it had at its peak of nearly 20,000 workers. 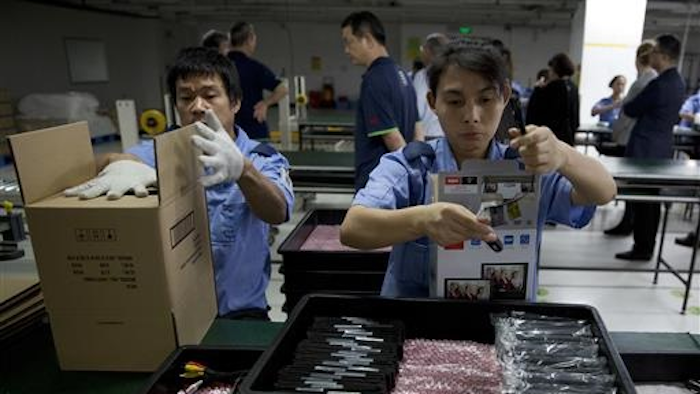 In this Tuesday, Nov. 10, 2015, photo, workers at Alco Electronics pack video display devices at the factory in Houjie Town, Dongguan City, in the Guangdong province of China. A look inside the factory shows what it takes to succeed as a maker of gadgets for the rest of the world: Human precision in tiny tasks, increasingly automated manufacturing, but also flexible thinking and perks to keep the best employees.
AP Photo/Ng Han Guan

DONGGUAN CITY, China (AP) — A look inside Alco Electronics Ltd.'s factory in China shows what it takes to succeed as a maker of gadgets for the rest of the world — human precision in tiny tasks and increasingly automated manufacturing, but also flexible thinking and perks to keep the best employees.

Chinese workers in blue coats and caps worked on a production line making tablets during The Associated Press' recent visit to the 2.5 million-square-foot plant. Their tasks can be tedious, such as soldering a connecter onto a circuit board. Machines do things like inspect incoming circuit boards and tighten screws on tablets — automation that lowers costs and improves quality. A droning noise signals where tablets are undergoing testing for all functions for eight hours before they're packaged. That's critical to help reduce returns.

Sunroofs keep the production floor lit and reduce energy use

The company, which counts Wal-Mart Stores Inc. as one of its top five retail customers, gets about 60 percent of its sales from tablets and other computer products. Nearly 70 percent of its annual sales of about $330 million came from North America. It ships its products under the RCA and Venturer brands.

Alco, founded in 1968 to make AM/FM radios to export primarily to North America, has shifted with market demands. In 1980, it moved production from Hong Kong to China in search of cheaper labor. Due in part to automation and the changing labor market, it has about one-tenth of the employees it had at its peak of nearly 20,000 workers.

The company is now juggling customer demand for affordable but high-quality electronics as it wrestles with escalating labor pressures and other costs in China. David Leung, head of sales for North America, recently spoke with the AP about what's selling, the differences in the Chinese and U.S. markets, and what Alco needs to do to attract workers.

Q. So the tablet is hot.

A. In the U.S., Wi-Fi is everywhere. So any device with the Wi-Fi capability is very popular. Content owners are putting the apps onto the tablet so they can sell directly to the consumer. We work directly with Wal-Mart on Vudu (which distributes movies over the internet to TVs.) The tablet is like a vending machine for your home. In peak times, we can do 40,000 (tablets) a day ... that is if all 200 components arrive on the same day.

Q. What kind of worker are you hiring?

A. It is not a shoe factory or a garment factory. In general, we don't need a skilled worker. We need a disciplined worker, a worker willing to learn.

Q. How are you trying to attract workers given the labor shortage?

A. Wages alone is not the biggest incentive. It's wages plus perks. We provide classes for them to learn in their free time. Many workers like to learn Cantonese and English as well. We also have karate classes, cooking classes. We have hired table tennis, basketball and yoga teachers to better their skills. We also host tournaments for volleyball, basketball, table tennis and badminton in our Sport Centre. Since we are now making electric bicycles for Europe, we also have a cycling team.

Whatever the worker likes to do, we will try to find a teacher.

Q. Where do you sell your products other than the U.S. market?

Q. What about China?

A. At the moment, we do not do a lot of business in China. Our product is more geared for the overseas market. We are starting to do some China business. We (started) selling Window tablets in the China market using portals like JD.com. In China, the physical store is not a big thing. They all rely on the internet. So we need to do our product with different packaging that is more suitable for the internet. Many of the streaming portals are not available in China. Even YouTube is not available. Also, Google is not available in China so we have to redo all our software.

China is a very big country. We need to learn about the distribution channel in China. We've been doing export market selling to the United States for the past 30 years. So although our factory is in China, selling in China is a brand-new market for us.

Q. How is marketing products in China different from North America?

A. Online is No. 1 in China. China skipped all the shopping mall phenomenon and they jumped right into internet selling. So in order to sell to China, you have to find the right website. You have to really get into the social network to promote your product. It's not the advertisements on TV that is the most important. It's the advertisement through social networking that is key in the selling of your products. 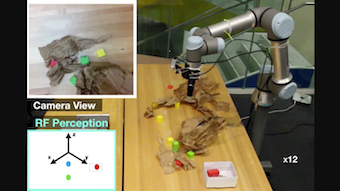 A look at how pharmaceutical processors are utilizing new tools, including AI, to ensure production reliability while eliminating downtime.
Feb 26th, 2021
Follow Us
Most Recent