If Raytheon Gets Jet Contract, Assembly Plant Will Be in Mississippi

The Waltham, Massachusetts-based company announced Monday that it has a shovel-ready site in Meridian.

MERIDIAN, Miss. (AP) — Raytheon Co . says that if it gets an Air Force contract to build 350 training jets, its assembly plant will be in Mississippi.

The Waltham, Massachusetts-based company announced Monday that it has a shovel-ready site in Meridian.

"We anticipate the Meridian facility will create hundreds of new jobs," spokesman B.J. Boling said in an email.

A Raytheon radar factory in Forest, Mississippi, has about 800 employees, according to a news release from Mississippi's congressional delegation.

The Air Force has said it expects to award contracts next fall. It is expected to formally ask for proposals in December, Boling wrote.

Boeing and Northrop Grumman say they have built all-new planes for the competition. Lockheed Martin and Raytheon say their entries are upgrades of existing planes.

The Air Force released requirements for what it calls the T-X trainer project in March. The current trainer, Northrop Grumman's T-38, was first built in 1961. It can be used to teach only six of 18 advanced pilot training tasks, and fewer than 75 percent of the 431 planes are usable, the Air Force said.

"New, cutting-edge training aircraft are critical to our national security, and I am confident that Mississippi workers can help provide those planes," U.S. Sen. Thad Cochran, a Republican and chairman of the Senate Appropriations Committee and its defense subcommittee, said in the delegation's news release. "I look forward to this competition and I am excited that Meridian may play an expanded role in defense of our nation."

Other members of Mississippi's delegation were equally enthusiastic.

"Mississippi's talent base is as skilled and prepared for high-tech manufacturing jobs as any in the nation and this is further proof of that," said Rep. Bennie G. Thompson, a Democrat. 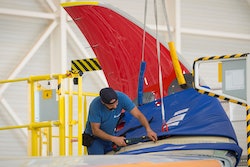