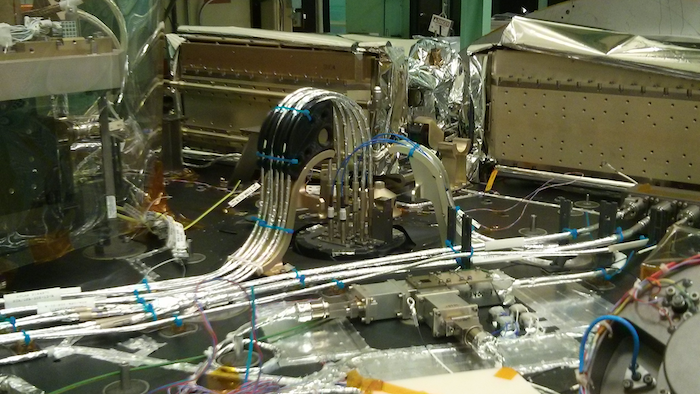 The 3D printed part, a black bracket holding the instrument's fiber-optic cables, is visible in the back of the ATLAS instrument.
NASA

NASA's follow-on to the successful ICESat mission will employ a never-before-flown technique for determining the topography of ice sheets and the thickness of sea ice, but that won't be the only first for this mission.

Slated for launch in 2018, NASA's Ice, Cloud, and land Elevation Satellite-2 (ICESat-2) will carry a 3D printed part made of polyetherketoneketone (PEKK), a material that has never been used in 3D manufacturing, let alone flown in space.

"This is a first for this material," said Craig Auletti, lead production engineer on ICESat-2's only instrument, the Advanced Topographic Laser Altimeter System (ATLAS) now being built at NASA's Goddard Space Flight Center in Greenbelt, Maryland. The part is a bracket that supports the instrument's fiber-optic cables.

Instrument developers chose PEKK because it's strong, but perhaps more important, it's electrostatically dissipative -- that is, it reduces the build up of static electricity to protect electrostatically sensitive devices.

It also produces very little outgassing, a chemical process similar to what happens when plastics and other materials release gas, producing, for example, the "new car smell" in vehicles.

In a vacuum or under heated conditions, these outgassed contaminants can condense on and harm optical devices and thermal radiators, significantly degrading instrument performance.

Although 3D or additive manufacturing is used to create a variety of products, so far, it remains a rare occurrence in spaceflight applications. In fact, the PEKK bracket is believed to be only the second 3D manufactured part to be flown in a spaceflight instrument, said Oren Sheinman, the ATLAS mechanical systems engineer NASA Goddard.

Additive or 3D manufacturing is attractive because it offers a fast, low-cost alternative to traditional manufacturing. With additive manufacturing, a computer-operated device literally prints a solid object, layer by layer, using a high-power optic laser that melts and fuses powdered materials in precise locations using a 3D CAD model.

"Had we manufactured this part classically, it would have taken six to eight weeks. We got it in two days," Sheinman said, adding that costs to the project were up to four times less than with a traditionally machined part.

The bracket, however is just one of the mission's firsts. ATLAS, itself, is a technical marvel, said ATLAS Instrument Scientist Tony Martino. It will be NASA's first space-borne, photon-counting laser altimeter and is expected to usher in a new, more precise method for measuring surface elevations.

As with its predecessor, ICESat-2 is designed to measure changes in ice-sheet elevations in Greenland and the Antarctic, sea-ice thicknesses, and global vegetation. However, it will execute its mission using a never-before-flown technique.

ICESat, which ended operations in 2009, employed a single laser, which made it more difficult to measure changes in the elevation of an ice sheet. With a single beam, researchers couldn't tell if the snowpack had melted or if the laser was slightly off and pointed down a hill.

ICESat-2 overcomes those challenges by splitting the green-light laser into six beams, arranged in three pairs, firing continuously at a rapid 10,000 pulses per second toward Earth.

Unlike analog-laser altimetry, which uses analog detectors and digitizes the return signal, ICESat-2 will employ a technique called photon counting. Used in aircraft instruments, photon counting has not yet been used for altimetry in a spaceflight instrument.

It more precisely records the time-of-flight of individual photons as they travel from the instrument, reflect off Earth's surface, and then are detected as they return to the instrument's detectors -- measurements that scientists use to calculate Earth's surface elevation.

Perhaps more important to scientists who want to know how the ice sheets change over time, the multiple beams will give scientists dense cross-track samples that will help them determine a surface's slope, while the high-pulse rate will allow ATLAS to take measurements every 2.3 feet along the satellite's ground path -- all at a higher resolution due to the photon counting.

"This is one of the new capabilities," Martino said. "We're getting cross track slope every time the satellite passes over." Furthermore, the satellite will pass over the same area every 90 days during ICESat-2's three-year mission, giving scientists a very detailed multi-year snapshot of how the ice is changing.

"It's almost completely built," Martino said, adding that the spacecraft will fly on the last Delta II launch vehicle. "All functional parts are there and our first comprehensive testing starts in February. We're on track."

Investing in the Human Element of IIoT

The company has more than 90 satellites in production, and has supported missions for the Air Force, NASA and DARPA.
Nov 12th, 2020

An insider's look at how the pandemic has forced OT/IT silos to be broken down in order to maintain output, improve remote working, and address cybersecurity.
Nov 5th, 2020

What Manufacturers Need to Know about the Industrial Internet of Things

The World Economic Forum expects work to be split equally between machines and people by 2025.
Oct 21st, 2020

Training a device to process data at the network edge via AI can make IoT implementations more efficient and provide greater predictive accuracy.
Oct 6th, 2020
Follow Us
Most Recent