The offender, Xiaoqing Zheng, worked at GE Power & Water in Schenectady, New York as an engineer specializing in sealing technology.

Evidence showed Zheng, and others in China, conspired to steal GE’s trade secrets regarding its steam and gas turbine technologies. They intended to benefit from China-based companies that research, manufacture and develop parts for turbines.

The arrest took place in 2018, and when Zheng was indicted in 2019, federal prosecutors called his actions “a textbook example” of industrial espionage.

The indictment featured 14 counts and said Zheng used files to obtain proprietary information and email it to his business partner and nephew, Zhaoxi Zhang. Prosecutors added that the two got financial support from the Chinese government and coordinated with government officials to reach research agreements with state-owned Chinese institutions to develop turbine technologies.

As far as the impact of Zheng’s actions, Assistant Director Alan E. Kohler Jr. of the FBI’s Counterintelligence Division said, “Good paying jobs could be lost and communities can suffer. These actions help China become more of a threat to our national security.”

Zheng's sentencing is scheduled for August 2. He faces up to 15 years in prison, a term of supervised release of up to three years and a fine of up to $5 million. 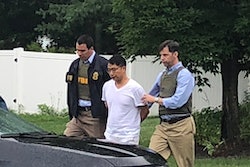