And he did it with a broken leg and cracked ribs.

On the night of Dec. 10, the Mayfield Consumer Products candle plant in Mayfield, Kentucky, was demolished by a tornado that reduced it to rubble. Eight workers lost their lives, but the death toll could have been higher if not for one man who pulled victims from the debris.

That night, Marco Sanchez was an inmate at the Graves County jail, but also on work detail at the factory. When the building came down on him and his co-workers, Sanchez found a small hole in the rubble and crawled out. He then worked feverishly to pull victims from the rubble and provide aid to others who were trapped and injured. And he did all of this despite suffering a broken leg and cracked ribs.

It was miraculous that Sanchez survived; many people died in the area where he crawled out. After he freed himself, he went to find tools and other supplies, and came back looking for survivors. He freed several people, possibly saving their lives.

During the commotion, he caught a ride to the emergency room, where he received treatment and then turned himself in to a state trooper at the hospital. As you can imagine, the trooper was busy and told Sanchez to do the right thing.

So Sanchez took a shuttle bus to a shelter because the jail was also lost in the tornado. Once he arrived at the shelter, he was placed back in custody.

On Feb. 22,  Sanchez received the Sheriff's Meritorious Award for his actions. When he received the award, he still had seven days remaining on his sentence. He was scheduled to be released on March 1, but didn't have a job or a place to live.

According to Sheriff Jon Hayden, Sanchez is a hard worker who also helped the county government move offices in the aftermath of the tornado.

"He is a very humble man," Hayden said. "We wish him the best and applaud him for his sense of humanity."

Sanchez was serving a year for stealing a phone.

The Mayfield Consumer Products plant will not reopen and the survivors have filed a lawsuit for “flagrant indifference,” because management refused to let employees go home as the storm approached.

The sheriff’s office is collecting donations to help Sanchez get back on his feet. They can be sent to Mayfield-Graves County Tornado Relief Fund, PO Box 9, Fancy Farm, KY, 42039, attention Mr. Marco Sanchez. 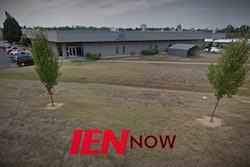 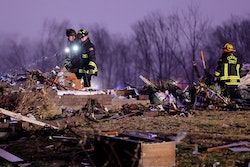