Automotive News is calling it a “talent drain,” as it revealed this week that more executives have left the EV startup, Canoo.

Canoo gained an early foothold in the EV startup race with its unique designs including “lifestyle vehicles.” These electric options, described by Canoo as a “loft on wheels” pair 250 miles of range with configurable interiors that feature wraparound backseats, better-than-average legroom and a bubble-like cockpit. Canoo also offers block-shaped delivery vans and pickups that are set to come after the lifestyle vehicle debuts later this year.

But design chops are only one piece of the puzzle in automotive and in this case, Canoo has struggled with a tumultuous year that’s been highlighted by the abrupt departure of its CEO, an SEC investigation and ongoing volatility with its stock price.

That’s a lot to take for a company that was just formed in 2017… and now there’s more.

Automotive News has reported that Canoo is hemorrhaging talent, citing several “key executives” who have fled the company in recent weeks. Departures, identified by an Auto News source who wished to remain confidential, include vehicle program lead Nicolas Leblanc as well as Richard Walker, who oversaw software controls. The source also said Mike de Jung and Steven Offutt, engineering experts who were some of the company’s earliest employees, are also departing.

A spokesperson reportedly told the news outlet that “When you have smart, talented people, this sometimes happens” though it seems to happen more at Canoo than average. These departures, in fact, follow the 2021 exits of the automaker’s CEO, CFO, CTO, general counsel and powertrain division lead. Earlier this month it was reported that the company’s CMO and vice presidents of manufacturing and investor relations were stepping down.

None of this has helped Canoo’s share price, which took a 24 percent dive through last Friday’s close, compounding challenges related to an SEC investigation announced last year. According to a filing, the investigation covers Canoo’s merger with an SPAC, plus its “operations, business model, revenues, revenue strategy, customer agreements, earnings and other related topics, along with the recent departures of certain of the Company’s officers.”

And while the investigation isn’t exactly ideal, CNBC pointed out recently that competitors Nikola, Lordstown Motors, Faraday Future, Fisker and Lucid Group “all went public through SPAC deals over the last two years” and all but two of them disclosed federal investigations since.

Canoo said in May that the SEC has informed the company “that the investigation does not mean that it has concluded that anyone has violated the law.” Still the steady stream of executive departures doesn’t bode well for the Canoo brand as it prepares to launch its first vehicle later this year in a crowded market for emerging EVs. 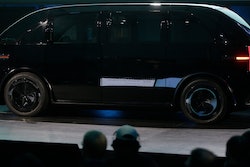