Emergency personnel in Tacoma, Wash., were called to the Gardner Fields asphalt plant on Sunday morning when 70 tons of liquid asphalt caught fire in storage silos.

The fire began around 4 a.m. and set off a series of explosions that released toxic chemicals into the air.

Investigators believe a mechanical failure in a supply line and valve between several storage tanks are to blame, but they are still unsure how the fire started.

The burning asphalt may have released dangerous chemicals into the air, and local residents were advised to stay indoors for a few hours. No one was reportedly injured by the accident.

According to local authorities, crews — including a special Hazmat team — spent several hours trying to shut off the natural gas supply to the fire and extinguish the blaze. The fire was put out by early afternoon using a special foam, and environmental contractors reviewed the site afterwards to make sure runoff from the foam-water mixture used to battle the blaze didn't run into nearby waters.

The industrial accident is currently under investigation.

The plant is one of Gardner-Gibson's 13 manufacturing and distribution facilities in North America. Gardner-Gibson manufactures roof, driveway and waterproofing coatings, caulks, spackles and wallpaper adhesives.

We reached out to Gardner regarding the impact on its operations, but the company has not responded. 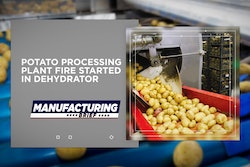