'Glitch' Forces All Polestar 2s Off the Road

The 'most complete electric cars money can buy' are shutting off and can't be restarted.

Volvo’s parent company, China-based Geely, has made headlines with the much anticipated release of its Polestar brand electric vehicle -- a performance sedan being positioned as a Tesla competitor at a reasonable price.

The recent release of the Polestar 2 came with much fanfare, including rave reviews from the likes of BBC’s TopGear, who called the vehicle “one of the most complete electric cars money can buy,” with “superb build quality.”

And while that may be the case, the Polestar 2 -- of which Geely has delivered only 2,200 units -- is off to a rocky start. That’s because the company has announced that they are all being recalled. We don’t get to say this often, but it’s a "total recall."

The models first hit the streets in July and already customers are complaining about a pretty serious problem. Several have reported that their vehicles have shut off unexpectedly while in use, and that they’re unable to restart them. The bricked vehicles then need to be towed from their location.

Reuters is calling the problem a “software glitch” but Cnet’s Road Show points out a similar problem that occurred in early Teslas. In Tesla’s case, the problem was traced back to the 12-volt battery and all that was needed was a replacement. In this case, it’s unclear whether it will be that easy and some reports say that problem has already been disqualified as the reason.

Either way, Polestar is pressured to get these cars back in business so it can establish itself as a legitimate player in the electric car industry. Based on reviews of the model, the vehicle has a fighting chance to actually take aim at Tesla customers and maybe even succeed. 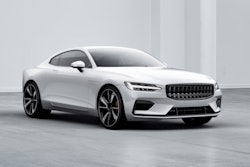