The coronavirus pandemic has affected virtually every segment of the economy, but it appears to be taking a particularly large bite out of the British ultra-high-end car market.

Days after supercar maker McLaren said it would cut about 1,200 jobs, embattled luxury automaker Aston Martin and Volkswagen-owned Bentley each said they would also slash hundreds of jobs after the virus outbreak hammed sales of cars that start at prices well into the six-figures.

Aston Martin expects to cut about 500 jobs as part of a cost-cutting plan that also includes reduced contracting, marketing and travel expenses.

The company replaced its CEO in May, just weeks after billionaire Formula 1 owner Lawrence Stoll led a rescue of the company as it flirted with bankruptcy. It hopes more efficient production and the debut of its first SUV later this year will put the iconic brand back in the black.

Bentley, meanwhile, reportedly plans to shed nearly one-quarter of its overall workforce, or up to 1,000 jobs. The company hopes to enact the cuts through voluntary measures but did not rule out layoffs, according to Reuters.

The pandemic resulted in hundreds of millions in lost or deferred revenue, but Bentley’s chief executive argued that although it helped hasten the move, “COVID-19 has not been the cause.” 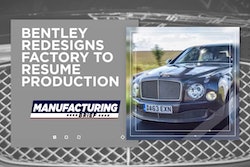