A 34-year-old worker has been charged with defrauding his employer after faking a positive COVID-19 test.

Santwon Antonio Davis faked a doctor's note to get out of work, and it forced the business to shut down and sanitize the facility.

The company wasn't named by the U.S. Attorney's office, but it's described as a Fortune 500 company with a facility in the Atlanta area.

When the company closed for cleaning, it paid employees during the shutdown. The business lost more than $100,000, and several coworkers were subjected to unnecessary quarantine.

Davis later admitted that he didn't have COVID-19.

According to a report from the Atlanta Journal Constitution, Davis is a felon who has served multiple sentences in prison. He was most recently released from prison in Feb. 2019. 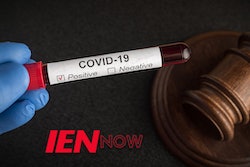