Inside the $17K Smartphone

Although it has all the bells and whistles that you’d expect, what really sets it apart are encrypted messaging and other security features.

Regardless of my continuing efforts to channel an internal Ron Burgundy, it’s become apparent that I’m not always kind of a big deal. One of the reasons I know this is because when it comes to a mobile device, my needs are pretty simple.

However, for those who have an office that smells of rich mahogany, let me introduce you to the $17,000 Android-based Solarin. Although the phone has all the bells and whistles that you’d expect, what really sets it apart are its security features.

Developed over the last 2-1/2 years by Israel-based Sirin Labs, the device features military-grade encryption technology that includes a physical toggle switch that will scramble outgoing voice calls and text messages – couple co-workers I know who wouldn’t mind having that feature.

Then there’s the 256-bit AES encryption software from KoolSpan and embedded Zimperium mobile threat protection, which is on par with what is used by the military for protecting strategic communications in the field.

Also included are a quad-core Qualcomm Snapdragon 810 processor, 4GB of RAM, and 128GB of storage. Download speeds are said to be up to 10 times faster than anything currently available.

Also included is a multi-directional, three-speaker array, which would seem highly contrary to the whole security focus of the device, as well as a 4,000 mAh battery. And to ensure you can snap those images warranting 17 grand worth of protection, a 24MP rear-facing camera and 8MP front-facing camera with a dedicated flash are also included.

The Solarin has been certified by IT security gurus The NCC Group, and the phone will only be sold to citizens of select countries who can provide Passport identification. 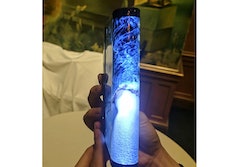 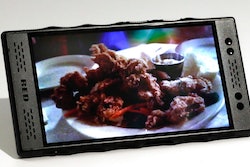