The board believes “captive audience meetings" should be outlawed. 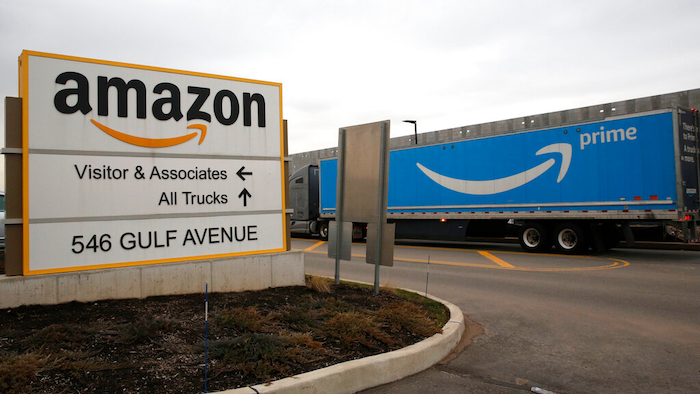 An Amazon Prime truck passes by a sign outside an Amazon fulfillment center March 19, 2020 in Staten Island, N.Y. The National Labor Relations Board has found merit to a complaint that Amazon violated labor law in New York City’s Staten Island by holding mandatory worker meetings to persuade its employees not to unionize. The agency’s determination was shared Friday, May 6, 2022 with an attorney representing the Amazon Labor Union, which filed the charge in the lead-up to the first successful U.S. organizing effort in the retail giant’s history.
AP Photo/Kathy Willens, File

NEW YORK (AP) — The National Labor Relations Board has found merit in a union charge that Amazon violated labor law in New York City’s Staten Island by holding mandatory worker meetings to persuade its employees not to unionize.

The labor board has in the past allowed employees to mandate such meetings, which are routinely held at companies like Amazon and Starbucks during union drives.

But in a memo sent to the agency’s field offices last month, NLRB General Counsel Jennifer Abruzzo said she believes the meetings, often called “captive audience meetings,” are at odds with labor law, and would seek to get them outlawed.

The agency’s determination was shared Friday with an attorney representing the Amazon Labor Union, which filed the charge in the lead-up to the first successful U.S. organizing effort in the retail giant’s history.

The attorney, Seth Goldstein, called it “a big victory.”

“These meetings have been legal for over 70 years,” an Amazon spokesperson said. “Like many other companies, we hold these meetings with our employees because it’s important that everyone understands the facts about joining a union and the election process itself.”

An NLRB spokesperson said the agency will issue a complaint against Amazon unless the retailer agrees to a settlement. If the company doesn’t settle, the complaint would trigger an administrative court process where both parties can litigate the case.

The agency also found merit in an accusation from the union that the company indicated to workers they could be fired if they voted to unionize, and threatened to withhold benefits should they chose to do so, according to an email from Matt Jackson, an attorney with the NLRB’s field office in Brooklyn.

“These allegations are false and we look forward to showing that through the process,” Amazon spokesperson Kelly Nantel said in a statement.

The Retail, Wholesale and Department Store Union, a union that ran a separate organizing effort in Alabama, has also filed a complaint over the mandatory meetings.

The e-commerce giant has filed objections over the union election that led to a labor win, claiming organizers and the agency's regional office in Brooklyn acted in a way that tainted the vote. A hearing over its claims is scheduled for later this month.

The union lost another election earlier this week at another Staten Island Amazon warehouse.