The company is tired of ringing doorbells. 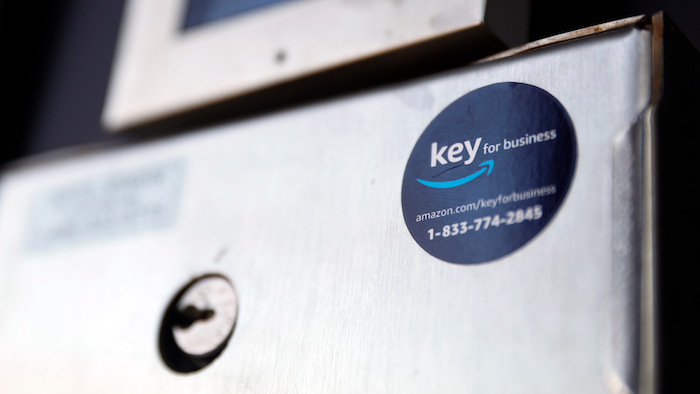 A blue sticker with the Amazon logo is displayed on a buzzer system in the apartment building of Jason Goldberg, chief commerce strategy officer at marketing company Publicis Communications, Monday, March 29, 2021, in Chicago. Amazon is making a push to install a device on buzzer systems in apartment buildings throughout the country that allows its delivery drivers to whip out a phone, tap a button and unlock a building's front doors whenever they need to leave packages in the lobby instead of the street.
AP Photo/Shafkat Anowar

The online shopping giant is pushing landlords around the country — sometimes with financial incentives — to give its drivers the ability to unlock apartment-building doors themselves with a mobile device.

The service, dubbed Key for Business, is pitched as a way to cut down on stolen packages by making it easy to leave them in lobbies and not outside. Amazon benefits because it enables delivery workers to make their rounds faster. And fewer stolen packages reduce costs and could give Amazon an edge over competitors.

Those who have installed the device say it reduces the constant buzzing by delivery people and is a safer alternative to giving out codes to scores of delivery people.

But the Amazon program, first announced in 2018, may stir security and privacy concerns as it gains traction. The company said that it does background checks on delivery people and that they can unlock doors only when they have a package in hand to scan. But tenants may not know that Amazon drivers have access to their building’s front doors, since Amazon leaves it up to the building to notify them. 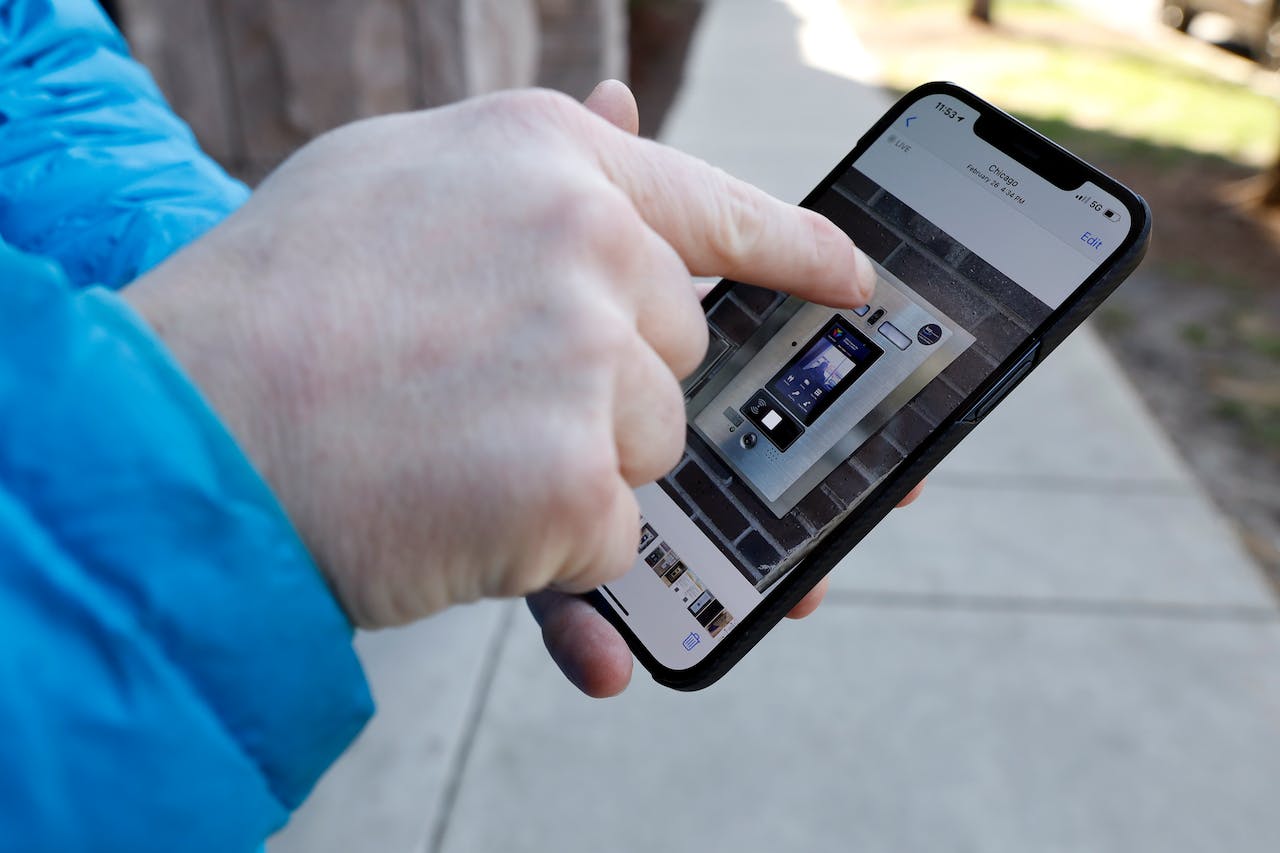 Jason Goldberg, chief commerce strategy officer at marketing company Publicis Communications, points out the blue sticker with the Amazon logo on the buzzer system in his apartment building on Monday, March 29, 2021, in Chicago. The online shopping giant is making a push to install a device on buzzer systems in apartment buildings throughout the country that allows its delivery drivers to whip out a phone, tap a button and unlock a building's front doors whenever they need to leave packages in the lobby instead of the street.AP Photo/Shafkat Anowar

Ashkan Soltani, a privacy researcher who was a senior tech advisor to former President Barack Obama, said that any device connected to the internet could be hacked, including the Amazon one, and bad actors could try to unlock the doors.

The company has already installed the device in thousands of U.S. apartment buildings but declined to give a specific number. It sometimes leaves a clue, placing a round sticker with the Amazon smile logo on buzzers where the device has been installed. On one New York City street, the sticker was on three of 11 buildings. In another neighborhood, two of seven buildings had the sticker.

Amazon salespeople have been fanning out to cities across the country to knock on doors, make cold calls or approach building managers on the street to urge them to install the device. The company has even partnered with local locksmiths to push it on building managers while they fix locks. Amazon installs the device for free and sometimes throws in a $100 Amazon gift card to whoever lets them in.

Soltani said he learned about Key for Business when he was approached by two Amazon salespeople in April who wanted access to the building where he lives in Oakland, California. Building management declined, and no device was installed.

Amazon had better luck with Kenton Girard. A Chicago landlord, Girard agreed to have the device installed in four of his buildings as a way to reduce package theft, which was getting so bad that he was considering building a package drop box outside.

“I would have paid to have it done,” Girard said of the Amazon device.

Currently, only the U.S. Postal Service has a way to enter apartment buildings in order to get to mailboxes. UPS says it has tested a way for its workers to enter buildings without buzzing tenants, teaming up with a smart-lock company in 2018. But that test ended, and UPS declined to say why. The company says customers can instead have their packages delivered to nearby grocery stores, dry cleaners or florists if they’re not home. 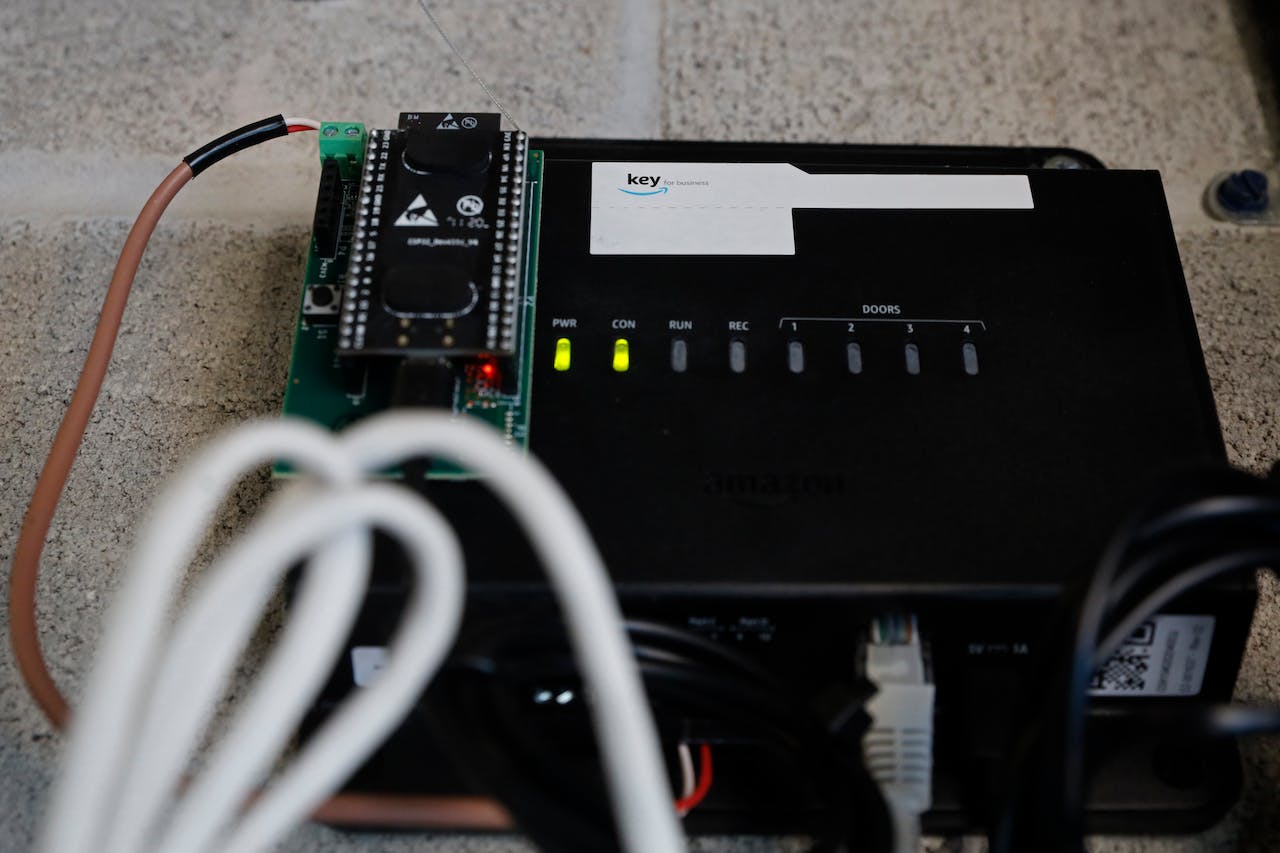 An Amazon device that gives delivery personnel access to a building's front doors to deliver packages, is shown Monday, March 29, 2021, in Chicago. The online shopping giant is making a push to install a device on buzzer systems in apartment buildings throughout the country that allows its delivery drivers to whip out a phone, tap a button and unlock a building's front doors whenever they need to leave packages in the lobby instead of the street.AP Photo/Shafkat Anowar

Amazon has wanted to walk through people’s front doors for years. In 2017, it launched a way for shoppers to let delivery people come in their home when they’re not there and leave packages in the foyer. Walmart did the same shortly after, but its delivery people also stocked the fridge with groceries. Amazon and Walmart don’t say how many people are using those services, but both have expanded them to more cities recently.

In 2018, Amazon set its sights on apartment buildings, launching Key for Business and signing up big landlords to install the device in their developments. But the push seems to have accelerated in the last year or so, with Amazon deploying salespeople nationwide. Recent job postings in Miami and San Antonio say Amazon salespeople can make $3,000 to $11,000 a month in bonuses and commissions. Amazon won’t say how much it’s spending on the effort.

Not all Amazon packages can get through front doors. The company delivers about 60% of its own packages itself, according to shopping data firm Rakuten Intelligence; the rest come through other delivery companies that can't let themselves in.

Philip T. Evers, a logistics professor at University of Maryland’s Robert H. Smith School of Business, said Amazon’s desire to get the device into as many buildings as possible may be a way to keep competitors out.

“The landlord may say, ‘You know, I’ll do this for one company, but maybe we don’t want it for every delivery company that’s out there,’ ” he said. He added that Amazon could find other uses for the service, like having delivery people pick up returns left in the lobby instead of making shoppers schlep to the post office. Amazon declined to share any future plans.

Jason Goldberg, chief commerce strategy officer at marketing company Publicis Communications, said the device could save Amazon money, since workers can drop off more packages during a shift and may have to offer fewer refunds to those whose packages were stolen.

He heard about the program in December, when a locksmith replacing the buzzer system at his Chicago condo building offered to install Amazon Key for Business for free. Goldberg, who helps manage the building, later allowed Amazon salespeople — dangling a $100 Amazon gift card — to install the device.

“They give it away for free because it benefits Amazon more than us,” Goldberg said. 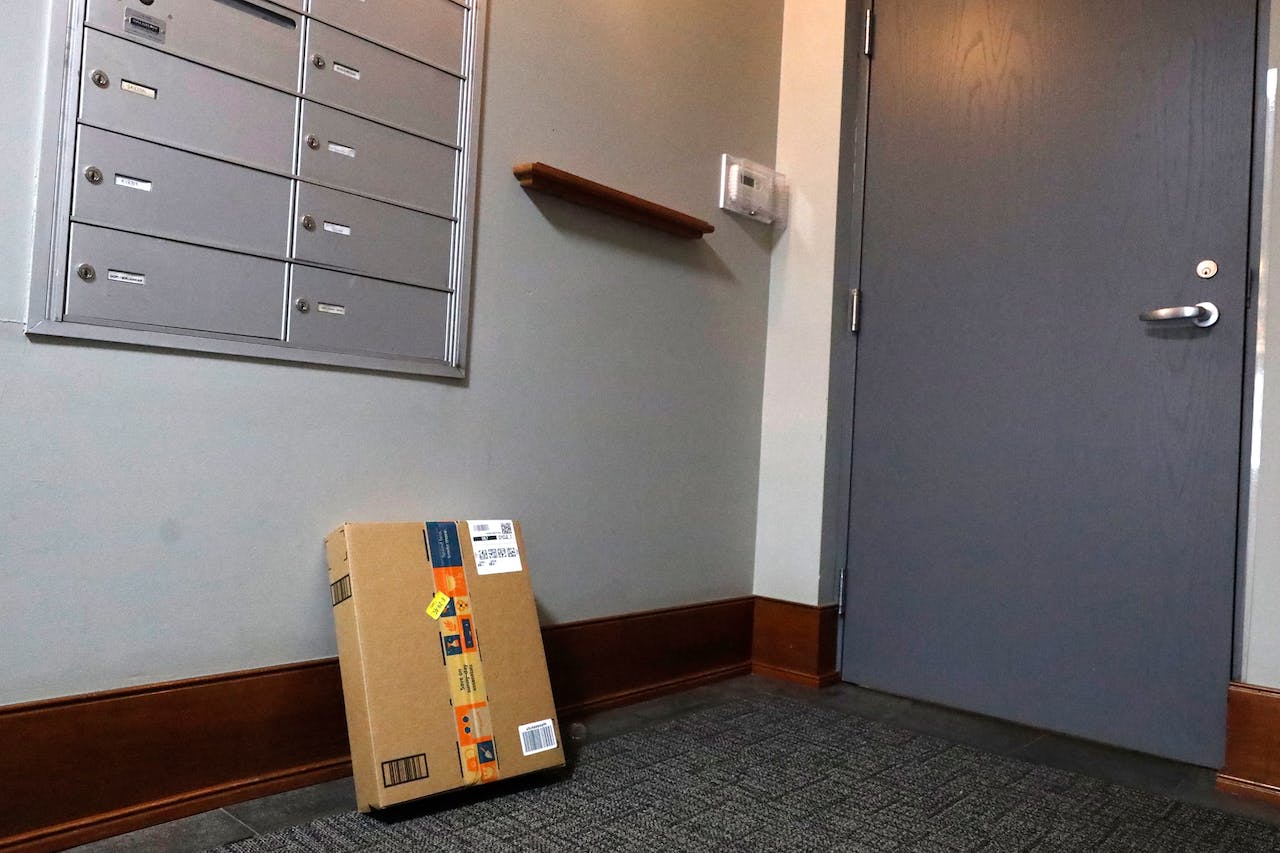 An Amazon package sits by the mailbox at Jason Goldberg's apartment, Monday, March 29, 2021, in Chicago. Amazon is making a push to install a device on buzzer systems in apartment buildings throughout the country that allows its delivery drivers to whip out a phone, tap a button and unlock a building's front doors whenever they need to leave packages in the lobby instead of the street.AP Photo/Shafkat Anowar