Major brands sound off on the situation. 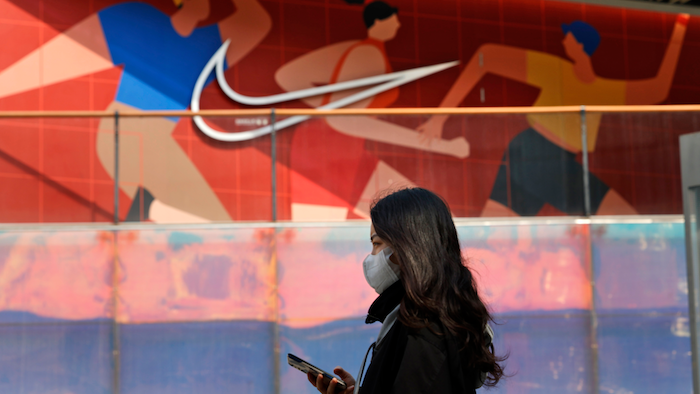 A woman wearing a mask passes by a Nike store in Beijing on Thursday, March 25, 2021. China's ruling Communist Party is lashing out at H&M and other clothing and footwear brands as it retaliates for Western sanctions imposed on Chinese officials accused of human rights abuses in the northwestern region of Xinjiang.
AP Photo/Ng Han Guan

HONG KONG (AP) — Nike. The Gap. Uniqlo. Major clothing and footwear brands are under attack in China after Europe, the U.S. and other countries sanctioned Chinese officials this week over alleged human rights abuses.

The companies, under pressure from activists, have tried to distance themselves from reports of forced labor in China's Xinjiang region. Such statements have drawn attacks from state media and others.

H&M was targeted first. The Communist Party Youth League called attention to a March 2020 statement by H&M that it would stop buying cotton from Xinjiang. Celebrities have cut their ties with H&M and Nike, and state media has called for a boycott of the Swedish clothing chain.

Here’s what some major brands have said about the Xinjiang situation:

“We strictly prohibit any type of forced labor in our supply chain, regardless of the country or region,” H&M said in an undated statement posted on its website. The retailer said it does not work with any garment manufacturing factories in Xinjiang, nor did it source any products from the region. It also said it conducted an inquiry at its factories to make sure they were not using any forced labor from Xinjiang.

The sportswear brand says on its website that it was “concerned about reports of forced labor” connected to Xinjiang. Nike said it did not source products from the region and confirmed with its suppliers that textiles or spun yarn used were not from the region.

American apparel brand Gap Inc. confirmed in a statement on its website that it does not source any garments from Xinjiang. “At Gap Inc., we have strict policies against the use of involuntary labor of any kind in our supply chain,” it said. The company also said it has taken steps to better understand how its global supply chain may be “indirectly impacted” since a significant amount of the world’s cotton comes from Xinjiang, as part of its commitment to “respecting human rights.”

Uniqlo’s parent company, Fast Retailing Group, said in an earlier statement on its website that it has a “zero-tolerance policy for any human rights violation and strictly prohibits all forms of forced labor.” The Japanese company added: “We are aware of reports raising serious concerns on the situation for Uighurs in Xinjiang, China. No UNIQLO product is manufactured in the Xinjiang region.” The company also said that no Uniqlo production partners subcontract to fabric mills or spinning mills in the region.

The sportswear brand said in 2019 that it has “never manufactured goods in Xinjiang and has no contractual relationship with any Xinjiang supplier.” However, Adidas confirmed in a separate statement that year that Xinjiang features in its global supply chain, as the company is supplied cotton from that region via a sustainability program called the Better Cotton Initiative. Adidas said it found no cases of forced labor on farms participating in that initiative.

Zara’s parent company Inditex said in an earlier statement that it has a “zero-tolerance approach” towards forced labor of any kind. The Spanish company also confirmed that it has no commercial relations with any factory in Xinjiang. As of Thursday, that statement was no longer accessible on its site.

New Balance previously said on its Canadian website that it did not have any manufacturers of finished products or key material suppliers in Xinjiang. As of Thursday, that statement was no longer accessible. In a separate 2019 Human Trafficking and Modern Slavery statement, New Balance said that it would work on mapping its supply chain further upstream to “identify potential risks” regarding forced labor.