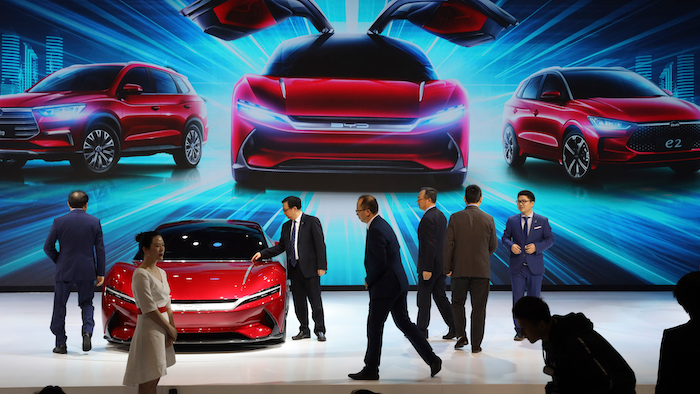 In this April 16, 2019, file photo, attendees take a close look at cars from BYD at the Auto Shanghai 2019 show in Shanghai. China’s auto sales plunged 81.7% in February, 2020, from a year ago after Beijing shut down much of the economy to fight a virus outbreak, adding to problems for an industry that already was struggling with shrinking demand.
AP Photo/Ng Han Guan, File

DETROIT (AP) — When the coronavirus cut off the flow of parts from China in early January, most global automakers were ready: Anticipating such a crisis, they had prepared to tap other suppliers and to conserve parts that they had stored.

Now, they face fast-moving new threats that seem beyond their control: Falling sales and sickened factory workers as the COVID-19 disease spreads through the United States and Europe.

The result is that the auto industry, which helped lead the U.S. economy out of the financial meltdown more than a decade ago, could be forced to reduce spending, slow or shutter factories and draw upon cash stockpiles to weather a pandemic that is likely to tilt the world into a recession.

Earlier this month, the consulting firm LMC Automotive lopped nearly 4 million vehicles off its forecast for 2020 global sales — a 4.4% decline to 86.4 million. For the U.S., the forecast dropped 3% to 16.5 million.

Others see a gloomier outlook. Adam Jonas, a veteran analyst at Morgan Stanley, expects about a 9% decline in the United States. In an investor note, Jones warned that sales for the year could go as low as 14.5 million, “driven by the potential demand shock that could stem from coronavirus fears.” Last year’s sales were above 17 million.

Jeff Schuster, a senior vice president at LMC, noted that his firm’s forecast was made early in the month and that conditions have worsened since then. It’s likely, Schuster said, that LMC's forecast could be downgraded in the United States and globally.

Garrett Nelson, senior equity analyst with CFRA, said auto sales in China are a good harbinger of what would happen as the virus spreads further in the U.S. and other countries. Sales in China fell 44% during the first two months of the year, including an 82% plunge in February, with much of the country on lockdown.

In the Seattle area, which is suffering through the worst COVID-19 outbreak in the nation, sales at Bowen Scarff Ford Lincoln have sunk to nearly nothing in the past week. But there are extenuating circumstances at the dealership in Kent, Washington: King County, which includes Kent, bought an 84-room EconoLodge hotel next door to the dealership to house people quarantined because of the virus.

As word has spread, business at the dealership has dried up, said Kari Weston, general sales manager. Customers have told the dealer that they won’t look over any of the 400 vehicles on the lot for fear that infected people might be leaving the hotel and wandering into nearby businesses.

“We’ve had three customers so far that said they won’t come down here,” Weston said. “We have employees now that are saying they won’t come in if the people aren’t going to be contained.”

Sales, she said, were pretty decent during the first week of March despite the outbreak. Then word got out about the hotel and traffic tanked.

“We are getting a few customers, but very few,” she said.

Keeping factories open may also be a problem. Carmakers PSA and Fiat Chrysler are closing factories in Europe until March 27 due to COVID-19. PSA noted serious cases near its factories and said it has experienced parts supply disruptions and “the sudden decline in the automobile markets.”

Ford closed a plant in Valencia, Spain, for a week after three workers came down with the virus in a single day. Volkswagen also shuttered factories in Spain and Italy.

Fiat Chrysler said last week that a transmission factory worker in Kokomo, Indiana, had tested positive for the virus. His work area was scrubbed, and workers who had come in contact with him were sent home, but production continued.

The United Auto Workers union and the three Detroit automakers set up a task force to protect workers.

For most people, the new coronavirus causes only mild or moderate symptoms, such as fever and cough. For some, especially older adults and people with existing health problems, it can cause more severe illness, including pneumonia. The vast majority of people recover from the new virus.

Initially, when the virus was just in China, it looked as though the auto industry would face a formidable parts supply problem. The area around Wuhan, the epicenter for COVID-19, is home to many auto plants with substantial parts exports.

But automakers had stocked up on parts in the fourth quarter ahead of a U.S.-China trade deal and before the Chinese New Year holiday in January, said Kristin Dziczek, a vice president at the Center for Automotive Research, an industry think tank in Michigan.

It’s not clear yet whether that stockpile will help delay production halts or mitigate them until factories restart once the virus eventually ebbs, she said.

Dziczek cautioned that even a disruption of one part could depress some U.S. auto production.

Once it became clear in January that the virus would be a serious threat, auto and parts makers established task forces and war rooms to locate other parts sources; ship parts quickly on airplanes; and conserve parts by limiting production to the more popular versions of each model. Continental, a German parts supplier, said it had more than 100 people working on coronavirus logistics.

At an event early this month, General Motors CEO Mary Barra said the company was prepared to manage parts shortages in the United States into late March. Since then, spokesman Jim Cain has noted since then that auto and parts plants in China have started to come back on line.

But Dziczek said that while production is starting to return in China, the virus is now affecting other countries that also make parts.

Analysts say some parts suppliers could face cash-flow problems if the virus continues to spread and sales and production fall. Should that happen, automakers might not want to keep factories open anyway. Layoffs would be possible. Some countries could slip into recession.

“If it goes so widespread, you can’t control it,” said LMC’s Schuster. “We’ll have to see how it plays out.”

That said, whenever the crisis is resolved, sales are likely to rebound swiftly from pent-up demand as people who had been seeking new vehicles return to the market.

“There is a feeling that things will come back quickly and that the (economic) fundamentals remain,” Schuster said.

It's the fourth straight month of growth.
Oct 13th, 2020
Follow Us
Most Recent