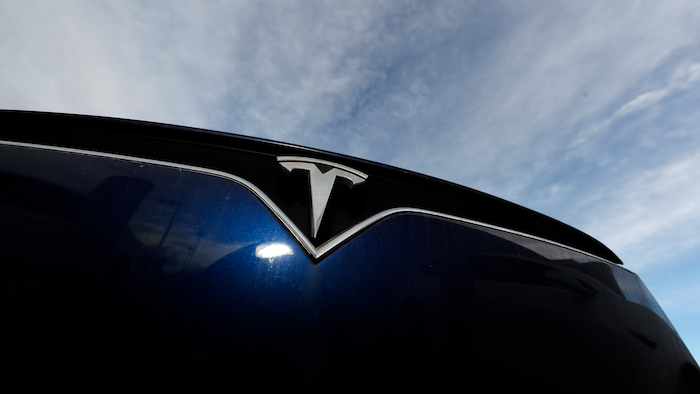 The Palo Alto, California, company said it made a $105 million net profit from October through December, or 56 cents per share, but still posted an annual loss of $862 million. The fourth-quarter earnings continued Tesla's meteoric stock appreciation. Shares rose nearly 12 percent in after-hours trading Wednesday to $648.50

The company said in its quarterly investor letter that it is starting to ramp up production of the Model Y small SUV in Fremont, California. The Model Y is a key product for Tesla's future because consumers are buying smaller utility vehicles. Deliveries are to start by the end of March.

The Model Y will be able to go up to 315 miles (507 kilometers) per charge, an increase over Tesla's previous estimate of 280 miles (451 kilometers), according to the letter. Tesla also expects to "comfortably" exceed production of 500,000 vehicles this year at its factories in Fremont and Shanghai. Model Y production in Shanghai will start in 2021. The company also said it plans to start producing limited numbers of its electric semi truck this year.

On a conference call Wednesday, CEO Elon Musk said Tesla is making progress on a full self-driving feature that he has said will be deployed this year. But the company still has a long way to go before its vehicles can travel without humans taking the wheel. Last year, Musk said he expected to start converting Teslas to self-driving in 2020 as part of a plan to create a network of robotic taxis to compete against ride-hailing services.

Critics have said Tesla doesn't have the sensors or proper technology to offer fully self-driving vehicles.

The coronavirus outbreak in China could temporarily delay production at the company's new Shanghai factory, Chief Financial Officer Zachary Kirkhorn said, and that may have a small impact on Tesla's first-quarter profitabilty. The company hasn't seen any parts-supply disruptions due to the outbreak but is monitoring the situation, he said. "This is an evolving story."

Musk said demand for the company's angular "Cybertruck" pickup has been high, but gave no numbers. "The demand is just far more than we could reasonably make in the space of three or four years, something like that," he said. Tesla also said in its investor letter that it's moving ahead with preparations for a factory near Berlin, and the first deliveries from the factory are expected next year.

Tesla expects net profits going forward, with some possible exceptions at times surrounding the launch of new products. "We continue to believe our business has grown to the point of being self-funding," the letter said.

Tesla shares have more than tripled in value since May of last year, pushing the company's market value above giant German automaker Volkswagen as well as the combined values of General Motors and Ford. The electric vehicle and solar panel maker's fourth-quarter revenue grew two percent to $7.38 billion as Tesla delivered about 112,000 vehicles during the period and a record 367,500 for the full year.

Tesla continued to build its cash balance during the fourth quarter, reporting $6.27 billion available. That's up from $5.34 billion at the end of the third quarter. Wedbush analyst Daniel Ives called Tesla's performance "potentially game changing," and a sign of what could be a new era for CEO Elon Musk and the company.

"We would characterize the fundamental performance as impressive with clear momentum looking ahead as a global inflection in EV (electric vehicle) demand appears on the horizon," Ives wrote in a note to investors Wednesday.