The announcement was not immediately confirmed by the U.S. side. 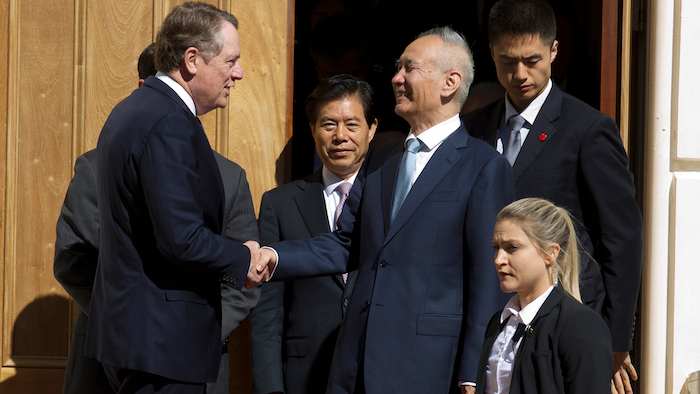 BEIJING (AP) — Top Chinese and U.S. trade negotiators have agreed to talks on a preliminary deal for resolving the tariff war between the world’s two largest economies, the Chinese Commerce Ministry said Tuesday.

In a brief notice, the ministry said that Vice Premier Liu He and other senior officials spoke by phone with U.S. Trade Representative Robert Lighthizer and Treasury Secretary Steven Mnuchin.

The announcement was not immediately confirmed by the U.S. side. It came after shares struck new record highs Monday on Wall Street following Beijing’s announcement of new guidelines for the protection of patents and copyrights.

Theft of such intellectual property has been a sore point in the trade war between the world’s largest economies, and investors saw China’s move as an encouraging sign.

However, the news of the phone call drew only a tepid reaction in Asia. Financial markets have been buffeted by conflicting signals for months, with upbeat comments followed by escalations in tensions.

The Shanghai Composite index was flat while the Hang Seng in Hong Kong also was almost unchanged by Tuesday’s news, which did not say a deal was imminent.

The inclusion of China’ Commerce Minister Zhong Shan, the Governor of the People's Bank of China Yi Gang, and Vice Chairman of the National Development and Reform Commission Ning Jizhe does indicate high level involvement at this point of the discussions.

It cited a scholar at the Chinese Academy of Social Sciences, Gao Lingyun, who it said was “close to the trade talks” and said the two sides may reach a “Phase 1” agreement soon.

Gao said Beijing and Washington had agreed that tariffs would be rolled back as part of such a deal, but had not agreed yet on which tariffs might be removed or lowered.

President Donald Trump imposed tariffs on billions of dollars’ worth of Chinese exports beginning in mid-2018. He said such moves were needed to win true concessions on longstanding issues such as complaints by foreign companies that Chinese companies steal or force the sharing of advanced technologies. His administration also wants China to scale back a national industrial strategy aimed at making Chinese industries leaders in new technologies such as robotics.

The two sides since have imposed punitive tariffs on thousands of each other’s products comprising a large share of trade. Trump has also ordered curbs on sharing of some technology with some Chinese companies.

Pressure is building to reach an agreement, with new U.S. tariffs set to hit Dec. 15 on many Chinese-made items on holiday shopping lists, such as smartphones and laptops.

But Trump could push back that deadline, as he did in October, to allow more time for talks.