Ministry spokesman Gao Feng said he had no new information to release, but that China was committed to working toward an agreement. 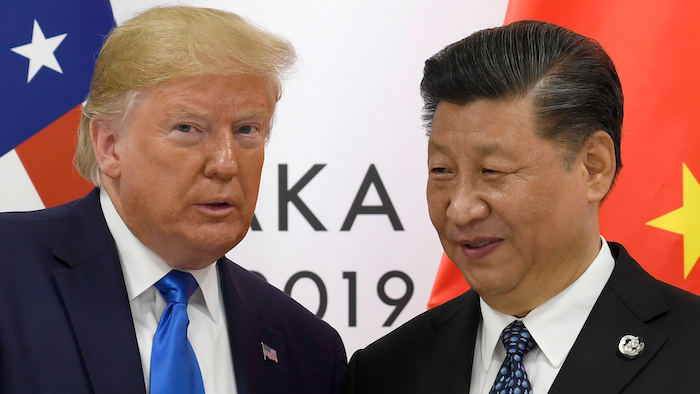 In this June 29, 2019, file photo, U.S. President Donald Trump poses for a photo with Chinese President Xi Jinping during a meeting on the sidelines of the G-20 summit in Osaka, western Japan.
AP Photo/Susan Walsh, File

BEIJING (AP) — China is working to resolve conflicts with Washington over trade, a Commerce Ministry official said Thursday, dismissing speculation the talks might be in trouble as inaccurate “rumors.”

Ministry spokesman Gao Feng said he had no new information to release. But he said China was committed to working toward an agreement.

“China is willing to address core concerns together with the U.S. on a basis of equality and mutual respect, and to work to conclude our discussions on the first phase” of a trade deal, Gao told reporters at a weekly briefing.

“This will benefit China, the U.S. and the world,” Gao said.

Financial markets have swung between elation and gloom in recent days as conflicting reports over the talks swirled. Some have cited officials saying they believe a deal is likely by the year’s end, while others have expressed skepticism.

Gao described such reports as “outside rumors that are not at all reliable.”

Since then, tariffs have been raised by both sides on billions of dollars’ worth of each other’s exports, squeezing farmers and manufacturers. A fresh set of tariffs is due to take effect Dec. 15 on about $160 billion of Chinese exports to the U.S., including smartphones, laptops and other consumer goods.

President Donald Trump had said he hoped to sign a preliminary agreement with his Chinese counterpart, Xi Jinping, at a regional economic summit in Chile in mid-November that was canceled due to protests. Prospects for the two leaders to meet and sign a deal soon appear uncertain.

Earlier this week Trump indicated he was prepared to go ahead with more tariff hikes if he does not get a deal with China that he likes.

The approval this week of a U.S. congressional resolution expressing support for human rights in Hong Kong after months of increasingly violent political protests drew an angry response from China’s foreign ministry.

It also rattled financial markets: markets fell Thursday for a second straight day in most regional markets after losses overnight on Wall Street.

China took control of the former British colony in 1997, allowing it a semi-autonomous status and separate legal and economic systems. It bristles at foreign comments on matters that it considers its internal affairs.

China has urged Trump not to sign the legislation, which passed both the U.S. House of Representatives and Senate almost unanimously.

“If the U.S. goes its own way, we will take countermeasures,” said Foreign Ministry spokesman Geng Shuang.

But Geng adopted a less fiery tone when asked about the trade talks, reiterating the stance that reaching an agreement is in the best interests of everyone.

“We hope both could meet each other halfway,” Geng said.